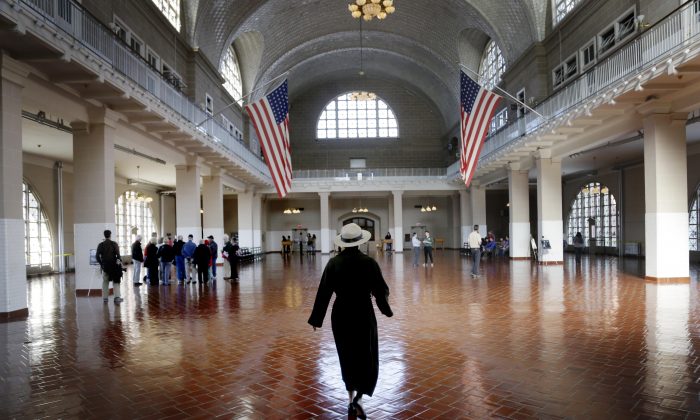 NEW YORK—The island where millions of immigrants first set foot on American soil reopened Monday, a year after it was shuttered due to damage from Superstorm Sandy.

Flooding from the storm inundated the boiler and electrical systems at the Ellis Island Immigration Museum on Oct. 29, 2012. More than a million photographs and other Ellis Island artifacts were placed in storage while the buildings were fixed and upgraded.

Crowds lined up in Battery Park to board one of the ferries to the island. Among them was Diane Smid, 55, whose grandparents, Pasquale and Fanny Antoniello, landed on the island from Naples, Italy, in 1921.

“It’s heartwarming to see what they had to do to come through here,” Smid said. “There was no communication, they didn’t know the language. To know that they came through here is amazing and humbling.”

Smid’s grandparents settled in Brooklyn and had 13 children born mostly to poverty. One of the boys was killed sitting on a street corner when a shooting broke out. Smid’s grandparents sent her father to build railroads with the Civilian Conservation Corps when he was 16, since they couldn’t support all of the children.

“But he made it. He lived the American dream,” Smid said.

The storm flooded the museum basement up to the ceiling and knocked out electricity, phone service, and the heating and air conditioning systems. It did not imperil the exhibits upstairs, but they were moved because they could have deteriorated without climate control.

“Yes, we are shy a little bit on exhibits and artifacts, but we’re not shy on character, at all,” said David Luchsinger, the superintendent for Ellis Island and the neighboring Statue of Liberty. He was standing in the former baggage room where millions of immigrants left their belongings.

“The history,” said Patrick O’Sullivan about his reason for the visit. “To look up if any of my namesakes came through here.”

The O’Sullivan family is visiting New York for a week. They saw that Ellis Island had reopened and rushed to get tickets.

“I loved it here before,” said Rosemarie O’Sullivan. “That’s why I brought my whole family.”