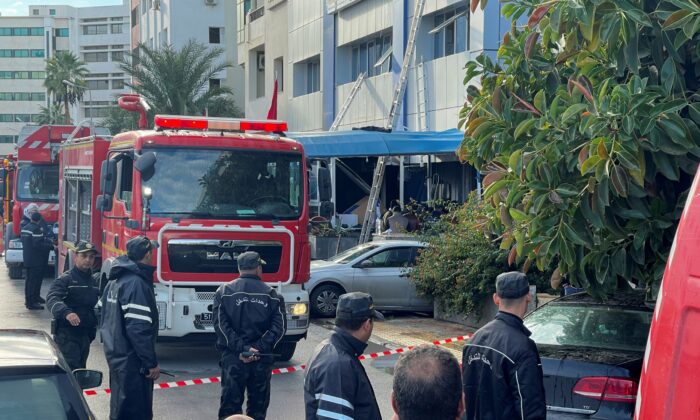 Security forces stand outside the headquarters of Tunisia's Ennahda party after a fire broke out a the building in Tunis, Tunisia, on Dec. 9, 2021. (Jihed Abidellaoui/Reuters)
Africa

TUNIS, Dec 9—One person died after he set himself on fire at the headquarters of Tunisia’s Ennahda Islamist party on Thursday, causing 12 injuries including to Ali Larayedh, an ex-prime minister, the civil protection agency and judicial authorities said.

Ennahda said one of its members was killed in the fire but did not give details.

Tunis court said the person that died in the fire is the man who set himself ablaze inside the main headquarters of Ennahda.

Rached Ghannouchi, head of the party, told reporters that the dead man obtained recognition from the state of his rights, but did not receive any compensation.

Two senior party officials were among the injured in the blaze at the building in the capital, Tunis, according to Ennahda members and witnesses.

One was Larayedh, who was injured when he jumped to safety from a second-floor window. Another was AbdelKarim Harouni, they said.

The Arab Spring—a wave of protests calling for more democracy across the Arab world—was famously sparked in Tunisia 11 years ago when a street vendor set himself on fire.