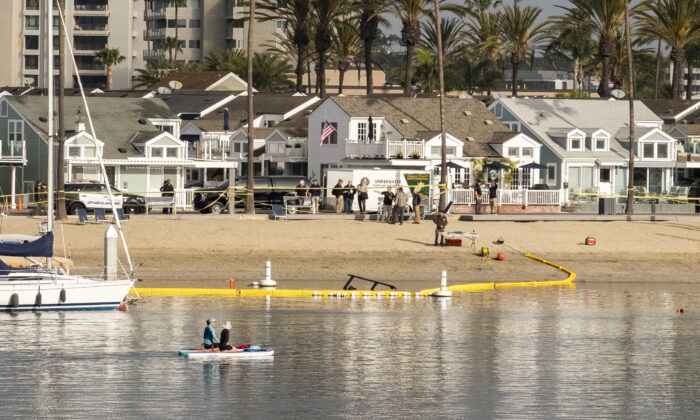 One Officer Killed, One Injured in Police Helicopter Crash in Newport Beach

NEWPORT BEACH, Calif.—A Huntington Beach Police Department helicopter crashed into shallow water in Newport Bay on Feb. 19, resulting in one officer being critically injured and the other officer dead, according to authorities.

“This is a difficult night for all of us,” Huntington Beach Police Chief Eric Parra said during a Feb. 19 news conference. “I ask for your prayers and support as we support our officer’s family and as we continue to grieve through this.”

The officer who died was 44-year-old Nicholas Vella. A 14-year veteran of the Huntington Beach Police Department, Vella was “truly dedicated to his job,” Parra said.

Vella was honored with a midnight procession where fellow officers escorted his body to the Orange County coroner’s office.

He is survived by his wife and a daughter.

Video footage from KCAL9 shows a group of lifeguards, police officers, and bystanders—who jumped in the water to help—pulling out the two officers.

The other officer, a 16-year veteran of the department, was rescued and later sent to a local hospital for critical injuries, and has since been released, according to the department’s Twitter post on Feb. 20.

“We are optimistic he’ll make a full recovery,” a spokesperson for the department told The Epoch Times.

On Feb. 19, the officers responded in Helicopter HB-1 to a call reporting a fight near 18th Street and Balboa Boulevard in Newport Beach, one of two cities the Huntington Beach Police Department Air Support Unit serves under contract.

At approximately 6:30 p.m., the helicopter crash-landed between the Balboa Peninsula and Lido Isle, according to authorities.

Joseph Thor, a witness, told KTLA he could see the helicopter deescalating while spiraling out of control before crashing.

Alex Burchinal, a Newport Beach resident and witness, told the Orange County Register he heard a high pitch noise from the helicopter that “didn’t sound right” before it crashed into the bay.

An investigation by the National Transportation Safety Board and the Orange County Sheriff’s Department Major Accident Reconstruction Team is underway to determine the cause of the accident, authorities said.

Until then, the police department grounded the remaining aircraft for inspection to see if mechanical issues were a factor in the crash. To prevent future incidents, the department plans to set safety practices in place going forward.

“This tragic accident serves as a reminder of the danger and the risks that our police officers put themselves in on a daily basis to protect our community,” Huntington Beach Mayor Barbara Delgleize said during the news conference. “Our [community] and our family here is grieving the loss of a brother, and I ask that everyone keep them in your prayers and support our police department as they have supported us.”