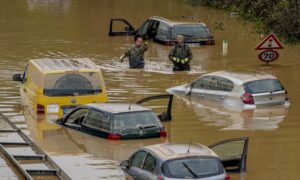 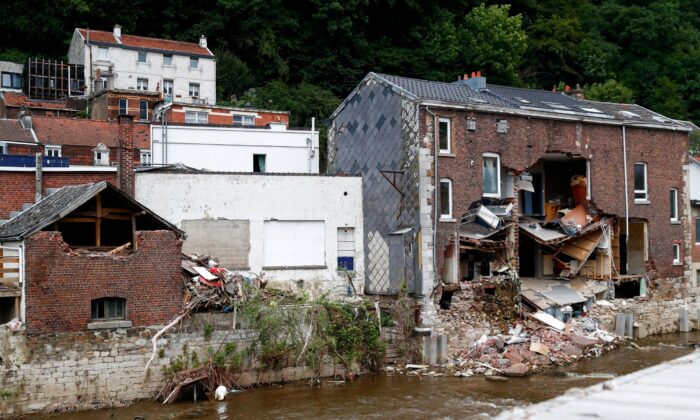 A building is destroyed after heavy rainfall in Pepinster, Belgium, on Aug. 9, 2021. (Johanna Geron/Reuters)
Europe

One Month After Floods, Belgians Try to Rebuild

BRUSSELS—A month after devastating floods in Belgium, residents said efforts to rebuild battered towns were picking up pace, but some still saw months of disruption ahead.

Flooding swept through parts of southern and eastern Belgium in mid-July, killing around 40 people and leaving a trail of destruction that cut power and swept away whole houses.

“Things are moving in the direction of improvement, as the army and the Red Cross are beginning to take over,” said Charlotte Depierreux, a restaurant owner in Liege, who launched a soup kitchen for flood victims.

Depierreux said the government had been slow to react, but her volunteer-run kitchen will close this week when the army takes over food distribution.

“We have to admit that unfortunately there was a delay in the response,” said Alex Baiverlin, head of social services in Pepinster near Liege where more than 1,000 homes were evacuated and a dozen buildings collapsed during the floods.

Gas supplies to Pepinster are not expected to resume until the end of the year—leaving many residents heading into winter without heating.

Baiverlin said the priority is to secure accommodation for homeless victims and provide electrical appliances for cooking and heating to those without gas.

“We will need a large number of heating engineers, electricians, who are going to be short. There will be waiting lists for all the jobs that need to be done,” he told Reuters.

The floods, which also devastated towns in Germany, came as a series of extreme weather events hit Europe—including deadly heatwaves in Italy and catastrophic wildfires in Greece.

Christina Haas, a 20-year-old student who lives in Pepinster, said the disaster had taken a mental toll.

“Rebuilding is one thing, but rebuilding yourself is another,” she said. “We cannot speak of a normal life at the moment. I don’t know when we can, but it will take time.”