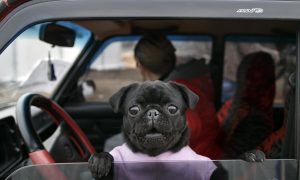 He may be small, but he’s still quite the hero. Harley, a crippled Chihuahua from Colorado, was honored by the American Humane Association in a ceremony over the weekend.

He is the 2015 American Hero Dog —an award that recognizes “ordinary dogs doing extraordinary things.”  The small-statured canine is the namesake of an effort to rescue dogs from puppy mills across the country.

But he didn’t simply luck into the limelight. Harley was once a puppy mill breeding dog himself; being treated as more or less the equivalent of a biological machine.

Now, the campaign called “Harley to the Rescue” has saved over 500 dogs from the brutality of puppy mills over the last two years. The initiative provides medical treatment and care for the rescued dogs as well.

Harley, who has only one eye due to an inhumane washing practice common in puppy mills, even rides along on many of the rescues—and he’s said to be aware of what’s going on as it happens.

The puppy mill experience also left Harley with a diseased heart. But it’s a strong one for sure.