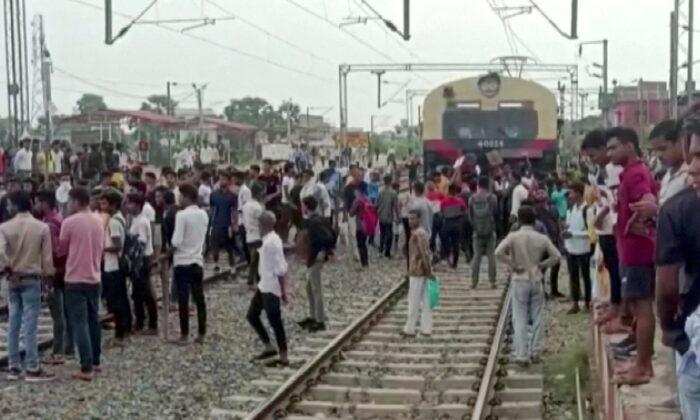 Demonstrators block a train as they protest against "Agnipath scheme" for recruiting personnel for armed forces in Jehanabad, Bihar, India, on June 16, 2022, in a still image obtained from a handout video. (Ani/Handout via Reuters)
Asia & Pacific

One Dead in India Unrest Over Military Hiring, Some Gatherings Banned

NEW DELHI—Authorities imposed restrictions on Friday on gatherings in a satellite city of India’s capital that is home to offices of several multinational firms, and one person was killed as protests against a new military recruitment process spread.

Prime Minister Narendra Modi’s government unveiled the new recruitment system this week, called Agnipath or “path of fire” in Hindi, triggering turmoil with police firing into the air to break up stone-throwing crowds and the torching of railway infrastructure.

The system aims to bring in more people to the military on short, four-year contracts to lower the average age of India’s 1.38 million-strong armed forces and cut down on burgeoning pension costs.

But many potential recruits object, concerned about employment opportunities after serving their four-year terms and disappointed to miss out on a pension, and thousands of young men took to the streets on Friday, with protests turning violent in at least three states.

One protester was killed in a clash with police in the southern city of Secunderabad, a government official said.

The administration of Gurugram district, south of New Delhi, said no more than four people could gather at one place in an effort to forestall demonstrations.

“This order shall come into force with immediate effect,” Gurugram’s administration said in a notice, a copy of which was posted on social media by the district’s information department.

While there have been no reports of protests in Gurugram, some demonstrators were out in the neighboring district of Palwal on Thursday.

Some of the world’s major companies have offices in Gurugram including Microsoft Corp., Meta, and Google Inc.. It is also home to manufacturing facilities of major Indian companies like Maruti Suzuki.

The new recruitment system has drawn criticism from opposition parties, and even from some members of Modi’s ruling Bharatiya Janata Party, who say it will lead to more unemployment in a country grappling with joblessness.

The government has said the armed forces aim to recruit about 46,000 people under the new system this year and will keep only 25 percent of them on at the end of their four-year terms.

In the northern state of Uttar Pradesh, protests erupted in 14 districts, and police fired into the air to push back stone-throwing crowds, senior police official Prashant Kumar said.

“The police are trying to disperse protesters by holding talks with them,” Kumar told Reuters.

Avnish Kumar, a 19-year-old from Uttar Pradesh’s Ballia district who hoped to join the army, said he was disappointed with the new scheme.

“The tenure of the job is only four years and only 25 percent people will get job after that,” he told Reuters by telephone. “There is no pension.”

Hundreds of people gathered in Secunderabad in the south, clashing with police and setting fire to railway station property, police said.

The new process will bring in men and women between the ages of 17-and-a-half and 21 for a four-year tenure at non-officer ranks, with only a quarter retained for longer.

Soldiers have previously been recruited by the army, navy, and air force separately, and typically serve for up to 17 years, for the lowest ranks.

The government on Friday also announced a one-time extension for the maximum entry age into the scheme to 23 since recruitment had been frozen for the past two years because of the COVID-19 pandemic.

By Devjyot Ghoshal and Saurabh Sharma