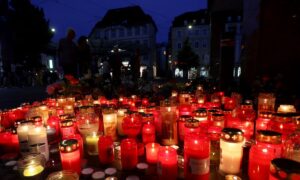 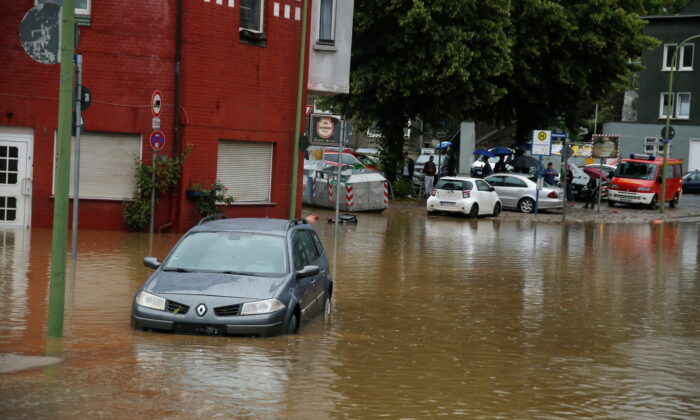 A car is seen in a flooded street following heavy rainfalls in Hagen, Germany, on July 14, 2021. (Leon Kuegeler/Reuters)
Europe

BERLIN—A fireman drowned and the army was deployed to help stranded residents on Wednesday after heavy rain triggered once-in-25-year floods in parts of western Germany, disrupting rail, road, and river transport in Germany’s most populous region.

The German Weather Service issued an extreme weather warning for parts of three western states, while Hagen, a city of 180,000, declared a state of emergency after the Volme river burst its banks.

The city’s crisis team warned that water would reach levels seen not more than four times a century in coming hours and warned everyone who lived near the town’s rivers to move to higher ground immediately, public broadcaster WDR reported.

“We see this kind of situation only in winter ordinarily,” Bernd Mehlig, an environment official from North Rhine-Westphalia, the most affected region, told WDR. “Something like this, with this intensity, is completely unusual in summer.”

Parts of Hagen were described as being isolated by high waters and all but inaccessible. Soldiers had to be sent to clear some areas of the city. Residents were also told to leave one district of the regional capital Duesseldorf, a major business center.

One old people’s home in Hagen had to be evacuated, while across the region firemen were busy pumping out hundreds of cellars. In one hospital, floodwaters caused elevators to fail.

The fireman died when he lost his footing in floodwaters and was swept away, authorities told WDR. Two men, aged 53 and 81, were missing elsewhere in the region.