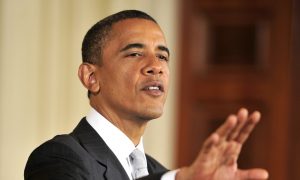 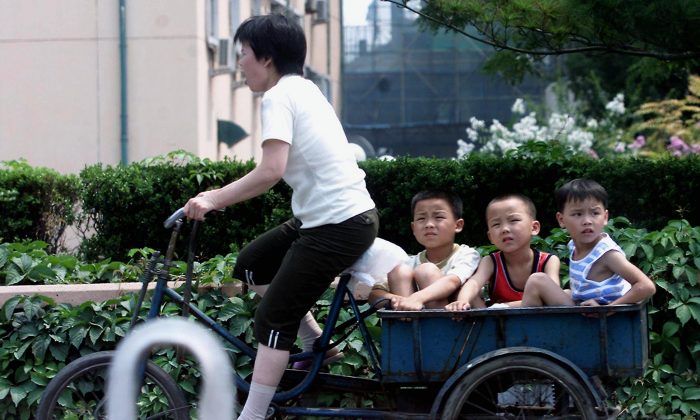 A woman peddles hard as she takes three young boys on her tricycle along a street in Beijing on July 18, 2001. (Goh Chai Hin/AFP/Getty Images)
News

Of the 13 Million Abortions a Year in China, Most Are Forced

Forced abortions in China are not a thing of the past. Under the one child policy, many women in late term pregnancy are still forced to abort their children. Chinese provincial authorities are responsible for mass forced sterilizations, and abortions are often performed by people with inadequate training in unsterile conditions.

“The one child policy causes more violence toward women and girls than any other policy on the face of the earth,” said Reggie Littlejohn, a one child policy expert and president of the newly-founded Women’s Rights Without Frontiers. “Forced abortions and forced sterilizations are an unacceptable form of population control.” She says that when there is free speech in the country people will be able to have a civilized discussion and come up with a solution, though she does not suggest any specific ideas.

Many women develop critical health problems for the rest of their lives and the emotional impact resulting from forced abortions contributes to the high rate of female suicides, she says.

Wei Linrong from Guangxi Province, a devout Christian and anti-abortionist, was forcibly injected with poison that killed her unborn child, according to a National Public Radio (NPR) report. Ten family planning officials visited her home and drove Wei and her husband to a maternity hospital.

Wei was put through nearly 16 hours of contractions before a stillborn emerged, blackened by the effects of drugs. The body was then thrown away like “rubbish” by nurses, according to NPR. Wei was seven months pregnant.

He Caigan, an unmarried 19-year-old, was forced to abort her child at nine months in the same manner, according to the report by NPR. The operation caused her prolonged physical pain and emotional trauma.

The one child policy was introduced in 1979 to curb the apparently growing problem of overpopulation. Years earlier, under Mao Zedong’s rule in the 1950s, Chinese people were encouraged to produce children to boost the country’s labor and military forces.

The recent China Daily article, echoed by a BBC report, attributes the high number of abortions to lack of education on contraception. However, experts say that most of the abortions are due to the one child policy.

“[We are] fairly certain most of [the 13 million] are forced abortions,” says Colin Mason, who conducted field work in Guangdong and Guangxi Provinces in March this year for the nonprofit Virginia-based Population Research Institute. The two provinces are “models” in China, where the one child policy is strictly enforced and all birth quotas are met. Based on his experience in China, he said most people would have more than one child if they could.

The most immediate effect of the one child policy is the harm it does to women and children.

Forced sterilizations and abortions are often done by people with inadequate training, and conditions are often unsterile. Many women develop critical health problems for the rest of their lives, according to Littlejohn. She added that the emotional impact resulting from abortions contributes to the high rate of female suicides in China.

Under China’s one child policy, couples must apply for a birth permit before having a child. Single women are forbidden to bear children, married women with one child are given an Intra-Uterine Device (IUD), and women with two or more children or a single son are sometimes forcibly sterilized.

Punitive measures taken to enforce the one child policy include exorbitant fines, coerced abortions and sterilizations, arbitrary detention, torture, and sometimes child abduction. A social compensation fee is the most common method; those who have unplanned pregnancies can be fined from one half to ten times their annual salary, according to Littlejohn.

Propaganda across the country warns against transgressing the policy, with signs lining streets, official billboards, festoon banners, and telephone and power-line poles. Some threaten sterilization for violators.

Signs from previous years were more severe, with slogans like “one more child leads to one more tomb” and “raise fewer babies but more piggies.”

The one child policy is enforced at a local, province-by-province level. The policy at the national level extends to every level of government. Local officials in Gansu Province were reportedly promised promotions and monetary rewards for performing a target number of sterilizations in their area, according to the 2008 annual report by the U.S. State Department’s Congressional-Executive Commission on China (CECC).

Bob Fu, founder and president of ChinaAid, a U.S.-based nonprofit Christian organization focused on human rights in China, said the one child policy endangered his family.

He was an English teacher at the Beijing School for the Communist Party when his wife became pregnant. The couple did not have a birth permit issued from their work unit under quota. They escaped to Hong Kong shortly to evade official pressures.

Fu’s sister-in-law also became pregnant outside of the one child policy’s sanctions. Though she escaped from family planning officials by running away from home, her husband was taken to the village office in the middle of the night and brutally beaten, said Fu.

If one person in a family is accused of an unplanned pregnancy, the rest of family is also liable—neighbors, parents, grandparents can all be caught and put in jail or pressured economically.

“Life is not good for the Chinese people, not because of overpopulation, but because of government policy,” Fu said.

Blind activist Chen Guangcheng sought to publicize the authorities’ forced abortions and forced sterilizations of thousands of women in Linyi, Shandong Province. He was jailed and tortured, and his family put under 24-hour surveillance, according to later reports.

The number of abandoned children is also mounting. Parents who get divorced sometimes abandon their child because policy prevents parents from having another child in a new marriage. Abandoned children become destitute and illegal, with no access to health care or education. The same happens to children whose parents did not obtain a birth permit.

Despite the acrimony associated with the consequences of these policies, Chinese Communist Party literature speaks of them in different terms. At the 2007 Asian-Pacific Economic Cooperation conference held in Australia, for example, China’s climate change promotional material made an equation between human lives and carbon emissions, stating, “Thanks to the policy of family planning China has pursued since the 1970s, its population growth has been lowered by more than 300 million, equivalent to 1.2 billion tons of annual CO2 emission reduction.”

Overpopulation Not the Problem

Officials have emphasized that the one child policy will remain unchanged in most parts of China and continue to be “strictly enforced as a means of controlling births for decades to come as overpopulation is still a major concern,” according to state-run media Xinhua.

Not so, says Dr. Nicholas Eberstadt, a political economist, demographer, and senior adviser to the National Board of Asian Research. He says that China’s fertility patterns are below the level needed for long term population stability in the absence of migration for the next two decades.

Furthermore, there will be a large population of unmarriageable, restless young men in the coming decades, he said.

A study published in the British Medical Journal in 2005 shows that males under age 20 exceeded females of the same age group by 32 million.

Normally, between 103 and 105 baby boys are born for every 100 baby girls, said Eberstadt. However, in China, the “biological hinges have been knocked off the door.”

The gender ratio in some rural provinces are as high as 130 baby boys for every 100 baby girls.

In accordance with cultural customs, families prefer boys over girls because they believe males can better support a family when parents age. This cultural preference, combined with the one child policy has created a slew of excess men, said Eberstadt.

According to his estimates, more than half of all second pregnancies with female fetuses must have been terminated to bring about the sort of gender imbalance China sees today.

“Chinese leadership just has to snap its fingers and the coercive policy disappears,” he said.