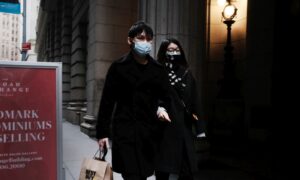 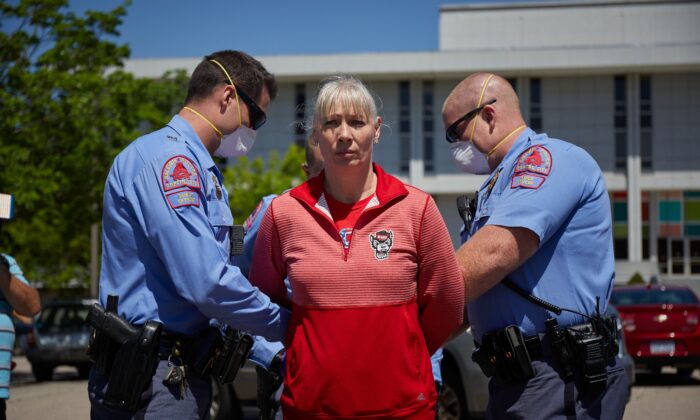 The protest, organized by Facebook group ReopenNC, saw police trying to contain demonstrators as they shunned social distancing measures and limits on public gathering to urge Cooper to lift the stay-at-home order issued on March 27 and allow non-essential businesses to reopen.

On Facebook, the group said it demands officials reopen NC “no later than April 29,” as it is “losing our small businesses, which are the backbone of our economy,” adding that the shutdown is “not warranted, nor sustainable for our area.” The group, which currently has 33,031 members said, “The vulnerable can be isolated or protected in other ways, without sacrificing our entire state economy,” and noted that “several other states have not enacted stay-at-home orders.”

At least one protester was arrested, officials confirmed. She was later named by Fox 8 as Monica Faith Ussery, 51, of Holly Springs, and was charged with violating Cooper’s executive order. The Epoch Times has been unable to verify this.

On Tuesday evening, Raleigh Police issued a statement on Twitter saying that “the goal of the Raleigh Police Department is to help residents remain as safe as possible during the COVID-19 pandemic by reminding them to observe the Wake County Stay-at-Home Proclamation and the governor’s Executive Orders.”

“In these unprecedented times and unusual circumstances, both the governor and the county have declared a state of emergency. Under these current and temporary declarations, protesting is not listed as an essential function,” they continued.

“The Wake County District Attorney is the individual who decides charging language for failure to adhere to the governor’s orders and the Wake County Proclamation, when charging is appropriate, and what charges individuals may face for violating either one of these orders. However, as a law enforcement agency, the Raleigh Police Department is bound to carry out the regulations stipulated in the Executive Order and the Wake County Proclamation. But more important is the health and wellness of all who live in our community, including the officers who must engage in circumstances such as these. We simply want everyone to be safe during this very serious public health crisis.”

Cooper on Monday warned North Carolinians that the state should hold firm on his shelter-in-place policy as social distancing is working. “We continue to see the spread of the virus accelerate in North Carolina but at a much slower pace because people are following the executive orders on social distancing,” Cooper said at a press conference. “What we are doing is working. We’re saving lives.”

Cooper added that “our biggest enemy is complacency,” and “the better we can be at staying home through April, the more likely we will be able to ease restrictions.”

As of April 15, there are 5,133 confirmed cases of the CCP virus in North Carolina and 113 people have died from the virus, which causes the disease COVID-19.