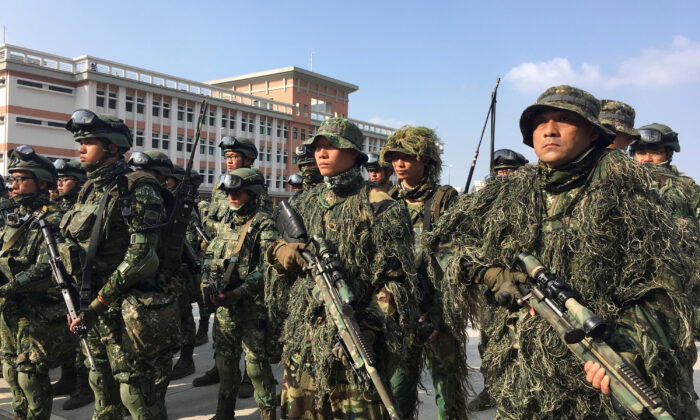 Taiwanese troops pose for pictures after conducting drills in front of the media, in Kaohsiung, Taiwan on Jan. 15, 2020. (Ben Blanchard/Reuters)
Asia & Pacific

On Taiwan’s Front Line With China, a Constant State of Alertness

CHIAYI, Taiwan—An alarm sounds and the pilots rush to their jets, sitting at the ready under a hardened shelter in the warm winter sun of southern Taiwan.

Their scramble into the air was only a drill before an audience of journalists. But for Taiwan’s Air Force and its most advanced fighters, the newly upgraded F-16V, the threat from China across the narrow Taiwan Strait is very real.

The Chinese regime claims Taiwan as part of its territory, and has not renounced the use of force to take it under its control. Taiwan, formally known as the “Republic of China,” has its own democratically-elected government, military, and currency.

Surrounded by farmland near the coast, the Chiayi air base is Taiwan’s first to be equipped with F-16Vs, which carry upgraded radars, avionics and will eventually field new air-to-air missiles.

Chiayi’s F-16 pilots are on call around the clock to see off the Chinese jets that regularly try to probe the airspace of the island.

“If anything happens and we’re needed, we can scramble,” said pilot Yen Hsiang-sheng, 33, a lieutenant colonel who did his flight training at Luke Air Force base in the United states.

Yen has intercepted Chinese H-6 bombers and J-11 fighters, and said he is confident in Taiwan’s defense forces.

“I believe that our performance can match the abilities of the mainland’s newest J-10 and J-11 fighters,” Yen said.

The Chiayi F-16s fly regular patrols over the Taiwan Strait, sometimes skimming so low that they have to be washed when they return to remove the salt spray and prevent corrosion.

President Tsai Ing-wen, re-elected in a landslide on Jan. 11 after promising to stand up to China’s threats, has made strengthening Taiwan’s defenses a top priority, including boosting its domestic defense industry so it can make high-tech equipment like submarines.

Taiwan’s air force, though well trained, is dwarfed by that of China, which is adding stealth fighters and whose bombers have flown regular drills around the island since 2016, when Tsai first took office.

Due to Chinese pressure and Taiwan’s diplomatic isolation, the United States is the only major country that sells the island weapons, and is indeed bound by law to provide Taiwan with the means to defend itself.

Taiwan is also upgrading its existing 144 F-16 A/B jets into the more advanced F-16V variant. That is expected to be complete by 2022. About 15 are already in service at Chiayi.