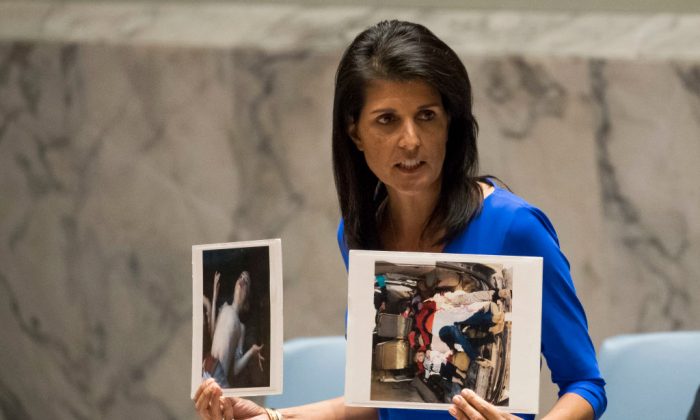 U.S. Ambassador to the United Nations Nikki Haley holds up photos of victims of the Syrian chemical attack during a meeting of the United Nations Security Council at U.N. headquarters in New York City on April 5, 2017. (Drew Angerer/Getty Images)
International

UNITED NATIONS—Ambassador Nikki Haley warned during a United Nations Security Council meeting on a deadly poison gas attack in Syria that when the world body fails to act collectively, then countries are “compelled to act.”

“Assad, Russia and Iran have no interest in peace. The illegitimate Syrian government, led by a man with no conscience, has committed untold atrocities against his people,” Haley told the 15-member council.

“When the United Nations consistently fails in its duty to act collectively, there are times in the life of states that we are compelled to take our own action,” said Haley. She did not signal what sort of action could be taken.

Deputy Russian U.N. Ambassador Vladimir Safronkov told the council that former U.S. President Barack Obama’s 2012 threat of military action if a “red line” was crossed and chemical weapons were used in Syria had provoked such attacks.

“That decision served as a starting point for future provocations by terrorists and extremist structures with the use of chemical weapons, they sought to discredit the official Damascus regime and to create a pretext for the use of military force against a sovereign state,” Safronkov said.

“We urge Russia to exert much stronger pressure to the regime … Frankly we also need an America that is seriously committed to a solution in Syria and that puts all its weight behind it,” he said.

‘What Is Your Plan?’

Speaking in the council, British U.N. Ambassador Matthew Rycroft asked Russia: “What is your plan? What is your plan to stop these horrific senseless attacks? We had a plan and we had the support and you rejected it to protect Assad.”

Safronkov responded by saying Russia has more than one plan, but the first one is to fight terrorism.

Rycroft said those vetoes sent Assad a message of encouragement and Tuesday’s attack was “the consequence.”

An investigation by the U.N. and the Organization for the Prohibition of Chemical Weapons (OPCW) found Syrian government forces were responsible for three chlorine gas attacks in 2014 and 2015 and that Islamic State militants had used mustard gas.

The United States, Britain and France have proposed a Security Council resolution to condemn the latest chemical weapons attack, and push Syria to provide an international inquiry with flight plans and logs for Tuesday, the names of all helicopter squadron commanders and access to air bases.

Russia has described the draft resolution as “unacceptable.” Council diplomats said it could be put to a vote as early as Wednesday afternoon.

Assad had agreed in 2013 to give up his chemical arsenal under a deal brokered by Russia and the United States.

U.N. High Representative for Disarmament Affairs Kim Won-soo told the Security Council on Wednesday that all Syria’s declared chemical materials and equipment have been removed or destroyed.

“For the past three years the OPCW has worked with the Syrian Arab Republic to assess and verify their declaration. A number of outstanding issues related to Syria’s declaration remain open,” he told the council.