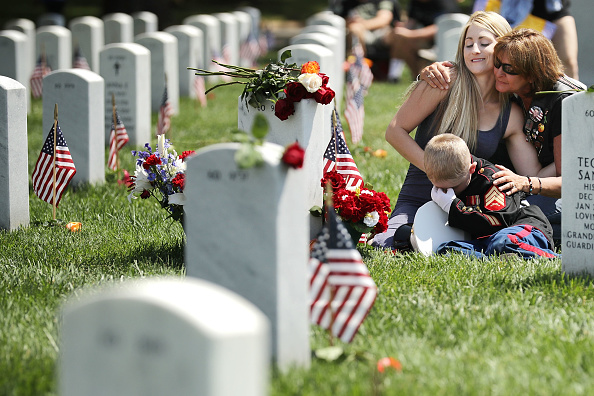 Brittany Jacobs (L) of Hertford, North Carolina, and her son, Christian Jacobs, 6, are embraced by a friend while sitting next to the grave of Brittany's husband, U.S. Marine Corps Sgt. Chris Jacobs, in Section 60 at Arlington National Cemetery on Memorial Day May 29, 2017 in Arlington, Virginia. (Chip Somodevilla/Getty Images)
Veterans

On Memorial Day, a Remembrance of the Fallen

In poems and stories, and in our hearts, we honor soldiers from time immemorial
By Cardinale Montano

The seed of a poppy can lie dormant in the ground for 80 years and sometimes more, it has been said. And so, it waits. Fast asleep, in the cool darkness.

Like a princess roused from enchanted sleep by the kiss of a prince, once disturbed, the seed will come to light and awaken.

If not by a prince then by the scuff of a foot, the scratch of a rake-tine, the reach of a plow-blade. Or, as in World War I by thousands of thrusting spades when miles and miles of trenches 12 feet deep were dug through peaceful farmland fields of Flanders, Belgium.

“In Flanders fields the poppies blow
Between the crosses, row on row,
That mark our place; and in the sky
The larks, still bravely singing, fly
Scarce heard amid the guns below.”

This soil was ravaged further then by the brutal, deadly rage of artillery and bombs that tore through it and ripped into the muddy trenches, on that portion of the Western Front. Thousands of poppy seeds lay sleeping in those fields. Through the deadly churning of earth, they came to light, and suddenly bloomed around the graves of the thousands of soldiers who had breathed their last breaths into the soil that had held them.

No one knew they were there until the blossoms appeared. Masses of bright red petals opened as if somehow their fervent effort could assuage the casualties of war who now lay dormant in the ground around them.

“We are the Dead. Short days ago
We lived, felt dawn, saw sunset glow,
Loved and were loved, and now we lie
In Flanders fields.

Take up our quarrel with the foe:
To you from failing hands we throw
The torch; be yours to hold it high.
If ye break faith with us who die
We shall not sleep, though poppies grow
In Flanders fields.”

Only half a century had passed since the Civil War had raged in the United States. On a day in the year of 1915, Canadian physician John McCrae stood at the grave of his friend and comrade in arms. Though moved to write this poem, I imagine the sum of his grief was not easily transferred to ink. He crumpled and discarded the page. It was found by some grace and saved, and while for him the poem did not express in depth the heaviness of loss he felt, the words lived on to move and hold the torn hearts throughout Britain and America.

The poem, “In Flanders Fields,” crossed over the sea and passed through the hands of Moina Michael in America. Daughter of a Civil War Confederate soldier, it moved her to fashion a simple poppy from a scrap of red silk. Pinning it to her coat, she vowed to wear it every day until she died. She made some 20 more, and these she shared at a YWCA Overseas War Secretaries conference. Soon, more were made by the hands of women from Allied nations to raise funds for war victims, and not long after, a symbol was born. The little silk poppy was adopted by the National American Legion and became their official sign of remembrance.

And 101 years later, at 8 a.m., the notes of a high school band will pleasantly collide with the morning song of birds, as instruments are warmed up down the street. Fire engines will arrive from neighboring towns and hold a steady engine-hum while excited children help each other attach bunches of shiny red, white, and blue plastic streamers to the handlebars of their bikes.

Aging veterans will carefully polish again and again the shiny medals clipped to the breasts and shoulders of their freshly pressed uniforms. Chins held high, backs straight, chests out, they form a flank of brotherhood extending far beyond the bright clamor sounding around them.

A powerful bond held tight in poignant memory of brothers in arms they lost through the ravages of war, commemorated this day as on every third Monday of May, in the earnest, humble sweetness of a small town parade.

They will start at the fire station and march down Main Street rain or shine—the veterans, boy scouts, girl scouts, police lieutenants, and all—to the sound of patriotic tunes from the band. The collective noise of engines, marching feet, and brass becoming a jumbled, muted stream diminishing to muffled drum beats, as their steady steps progress toward the cemetery.

Traces of sound stream like ribbons through the warm spring air, birds swooping between, then hovering over them where the marching ends. The gun salute will follow as utter silence descends for the Memorial address.

Trees have leafed out fully, and colorful flowers decorate the graves.

Out of these small-town homes and farms nestled in the Berkshire hills and valleys, some 5,000 men fought during the Civil War. The Massachusetts Volunteer Militia company was one of the first units called to action, responding with only 24-hours’ notice to President Abraham Lincoln’s call to the states for troops to defend the capital. It is of equal relevance that Berkshire County, authorized by the Emancipation Proclamation, also formed a solid portion of the 54th Massachusetts Glory Regiment. Of these men, Lincoln said:

“When victory is won, there will be some Black men
who can remember that, with silent tongue and clenched teeth,
and steady eye and well-poised bayonet,
they have helped mankind on to this great consummation.”

How difficult to pen these thoughts today! How utterly inadequate I feel even trying, not having suffered through or experienced firsthand the ravages of war.

This, though, I know, because I am good with a needle and thread:

That you can tear a piece of fine clothing and mend it, so it can be worn again. Life goes on, and one day you are reckless and tear it again, and yes, again it can be mended. Perhaps you learn from that to be more gentle, so as to keep it intact. But maybe not. And then one day it tears yet again, and then once more and pretty soon, the scars of little stitches are far too many, and can no longer hold the cloth together. It falls in separate little pieces to the ground.

These are my thoughts, walking barefoot through the dew-wet grass this day, collecting pollen on my feet.

I see the scarlet poppy blossoms have grown too heavy for their stems and are leaning over the flat stones of the path. Kneeling down at the edge of the garden, I lift their bowing heads and try to prop them up with twigs.

“Oh! you who sleep in Flanders Fields,
Sleep sweet – to rise anew!
We caught the torch you threw
And holding high, we keep the Faith
With All who died.

We cherish, too, the poppy red
That grows on fields where valor led;
It seems to signal to the skies
That blood of heroes never dies,
But lends a lustre to the red
Of the flower that blooms above the dead
In Flanders Fields.

And now the Torch and Poppy Red
We wear in honor of our dead.
Fear not that ye have died for naught;
We’ll teach the lesson that ye wrought
In Flanders Fields.”