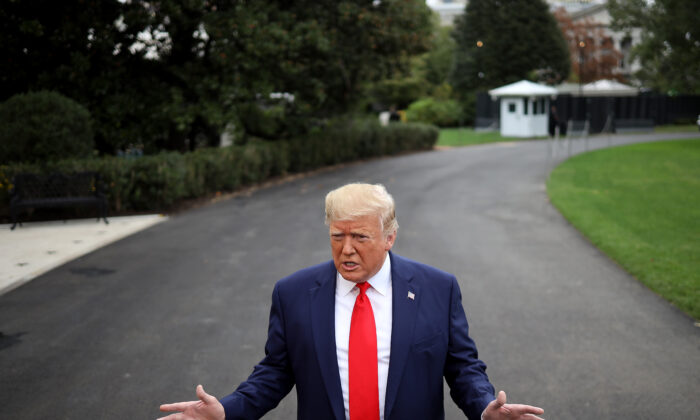 Mueller’s dismal performance, start to finish, only underscored the special counsel report takeaway of “no collusion.” It was time to celebrate, or so it seemed. The Federalist called the event “a complete disaster for Democrats.” Breitbart crowed, “Robert Mueller Testimony Backfires on Democrats as Republicans Move in for the Kill.”

My own take, both as a Trump supporter and an analyst of the anti-Trump conspiracy, couldn’t have been more at odds, more discordant. I walked through my very different reaction in The Epoch Times in an op-ed called “Why I Am Not Celebrating the Mueller Hearings.”

With the release of the text of the July 25 call between Trump and Ukrainian President Volodymyr Zelensky, I believe Trump may have had a similar reaction.

Regarding the jubilation of Trump world, I wrote:

“I rubbed my eyes, tried to smile, but it didn’t work. I still felt snookered and betrayed by Republicans who inexplicably failed to take the kill shot and win a victory for the country by exposing the whole rotten deep state conspiracy—enabled and amplified by the mainstream media—to concoct a tale of a massive Russian cyber-strike on our democracy supposedly designed to prevent Hillary Clinton from being elected.

“This big lie has not only delegitimized Trump’s presidency now and forever, it simultaneously aligns Trump supporters—American patriots—with our adversaries in the Kremlin. Believe me, this will come back and haunt us all when Schiff, Tlaib, Brennan, and the rest of their ilk get real power.”

Why did no Republican want to pull the pin on Russian hacking? I went back to a June 2017 op-ed I wrote by the same name, “Pulling the Pin on Russian Hacking.” Change the names around and it could run this morning:

“About those Comey hearings. Not one U.S. senator asked former FBI Director James Comey to account for the sinister fact that the source of the explosive determination that ‘Russia hacked the DNC’ computer system is a DNC contractor, not the FBI.”

The name of that DNC contractor is CrowdStrike.

“Not one U.S. senator asked why Comey’s FBI deferred to Debbie Wasserman-Schultz’s DNC when the DNC refused to permit FBI forensics specialists to examine the DNC computer system; or why the FBI was never able to examine John Podesta’s personal devices, either. Not one member of the Senate Intelligence Committee inquired as to why the DNC servers have not, after all of this time, ever been re-examined by the FBI; or whether it is just possible that this same DNC contractor putting forward the DNC—Russian hacking charge might have destroyed the DNC computer system.

“The scene of the crime.

“As mysterious and sensational as these unanswered questions are, so, too, are the reasons they have not been asked.”

As I noted in July, these same seminal questions weren’t asked of Mueller, either.

“No, We the People are still expected to accept without question, without evidence, that ‘Russia hacked the DNC’—or, rather, that ‘the Russians systematically and sweepingly interfered in the election’—because CrowdStrike, a DNC contractor with a spotty record, co-founded by a Mueller protégé named Shawn Henry [and a Russian emigre named Dmitri Alperovitch], said so. The FBI never even reviewed CrowdStrike’s final report, having received only a redacted, draft version.

“The whole set-up was surreal—but not as surreal as the failure of Republicans to expose it during the Mueller hearings.”

Did Trump think so, too?

Here’s what we know. On July 25, the day after the Mueller hearings, Trump called up Zelensky bright and early at 9:03 a.m. EDT. The five pages of transcript recently released by the White House to counter a hearsay report by a “whistleblower” reveal a congratulatory call: Four days earlier, Zelensky’s party had had a great success in parliamentary elections.

But might the Mueller hearings have provided extra impetus for Trump to pick up the phone? Did the president also have in mind the previous day of hearings, which had passed without a single Republican exposing the original big lie of the anti-Trump conspiracy by asking Mueller some simple questions: How could it be, first, that the FBI and then the special counsel failed to examine the DNC server (or Podesta devices) for evidence of a Russian hack? How could it be that the FBI and then the special counsel investigation relied utterly on a redacted draft report produced by a DNC contractor named CrowdStrike?

As the 30-minute conversation between Trump and Zelensky unspooled, the two presidents spoke of draining the swamp in their respective countries (the topic having been introduced by Zelensky). They discussed how the Europeans talk big about Ukraine but do little. (Zelensky: “Logically, the Europe Union should be our biggest trading partner, but technically, the United States is a much bigger partner …”) Zelensky raised an upcoming purchase for Ukrainian defense of U.S. Javelin anti-tank missiles.

It was at this point that Trump asked Zelensky “to do us a favor.”

Read the transcript below very carefully to see how Trump describes this “favor.” Note that it has absolutely nothing to do with the Bidens, Joe or Hunter, or the 2020 election.

Key excerpt : “Our country has been through a lot and Ukraine knows a lot about it. I would like you to find out what happened with this whole situation in Ukraine, they say CrowdStrike … I guess you have one of your wealthy people … The server, they say Ukraine has it.”

Imagine, now, that you are a swamp creature on July 25. Every conservative outlet is trumpeting that “Russian collusion” is over, but the big lie that “Russia interfered on Trump’s behalf in 2016” remains untouched, as poisonous as ever, and ready for future deployment, and Trump’s chumps haven’t noticed.

But then news of this phone call leaks out into the swamp—catastrophe! As the 30-minute conversation between Trump and Zelensky unspooled, the two presidents spoke of draining the swamp in their respective countries (the topic having been introduced by Zelensky). They discussed how the Europeans talk big about Ukraine but do little. (Zelensky: “Logically, the Europe Union should be our biggest trading partner, but technically, the United States is a much bigger partner …”) He was asking about “CrowdStrike” and “the server,” and was doing so outside conventional government channels and thus beyond the control of the anti-Trump conspirators embedded throughout his own government—and, for that matter, governments in London, Sydney, Malta, or Moscow.

As the implications of Trump’s efforts became clear, I’m guessing the swamp heated up to red-hot boiling point. They needed a “whistleblower” complaint, and quick. They needed to change the rules around to see to it that such complaints accept hearsay, as opposed to first-hand knowledge exclusively. They needed to call the apparatchiks of the deep state into action to declare a new war on the president and the U.S. people who elected him with an illegitimate, concocted “impeachment inquiry.”

Their reasoning is clear: Unless they destroy him first, Trump still might save the Republic.