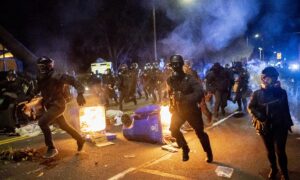 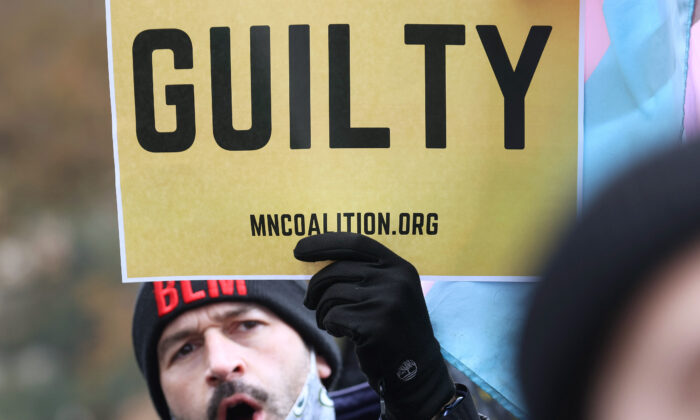 People react after the verdict was read in the Derek Chauvin trial in Minneapolis, on April 20, 2021. (Scott Olson/Getty Images)
Viewpoints

On Julius Caesar, Derek Chauvin, and the Fate of Our Republic

Julius Caesar is often blamed for bringing about the end of the Roman Republic.

I think he merely happened to be there when the Republic imploded.

In 49 B.C., Caesar crossed the Rubicon, a shallow river in Northern Italy, with a single legion.

The river marked the border between cis-Alpine Gaul and Italy proper. Bringing armed troops into the fatherland was illegal, tantamount to treason.

Caesar knew this, which is doubtless one reason he never mentions the episode in his account of the civil war that his action sparked.

Nevertheless, it’s worth noting that Caesar did not “cross the Rubicon” gratuitously.

He had been at loggerheads with the Senate for months.

Over the preceding decade, he had conquered Gaul, greatly enriching himself and the Republic.

Yet Caesar had many enemies. Indeed, after a tumultuous term as consul in 59, he had originally decamped to Gaul in order to escape them.

At first, his alliance with Crassus, the richest man in Rome, and Pompey Magnus, Rome’s greatest general before Caesar, protected him.

But Crassus, seeking military glory to crown his monetary splendor, died ignominiously at the hands of the Parthians at the battle of Carrhae in 53.

Pompey had been bound to Caesar through marriage to Caesar’s daughter Julia.

But after Julia died in childbirth, in 54, Pompey drifted out of Caesar’s orbit.

His marriage to the daughter of Metellus Scipio, one of Caesar’s bitterest enemies, formalized the end of the alliance. Pompey was now a creature of the anti-Caesarian faction of the Senate.

As his extended term as governor in Gaul was coming to an end, Caesar’s enemies demanded that he disband his army and return to Rome, where he would certainly face prosecution.

Nevertheless, Caesar agreed, just so long as he could first stand again for consul in absentia. The wildly popular Caesar was confident he would be elected, and with the office came immunity from prosecution.

His enemies refused to allow this. “Alea iacta fuit”: the die had been cast.

Caesar crossed the Rubicon with Legio XIII, and the rest, as they say, is history.

Caesar destroyed Pompey’s army at the battle of Pharsalus the next year and went on to crush all remaining pockets of resistance. In 46, the Senate named him dictator for 10 years.

So did Caesar kill the Republic? Or had the Republic, as he himself said long since become “merely a name, without body or shape”?

I think Caesar was right. The Republic had expired years before he came on the scene.

Certainly, it was dead in fact, if not in name, by the mid-80s when Lucius Sulla marched his army on Rome, appointed himself dictator, and began issuing public lists of enemies whose property, and whose lives, were forfeit.

Thousands died before Sulla, to the world’s amazement, voluntarily stepped down.

In fact, the fate of the Republic was already sealed decades earlier, when the Gracchi brothers, Tiberius and Gaius, introduced mob violence to the streets of Rome in the course of pursuing their anti-aristocratic policies of land reform.

I thought of this course of events over the weekend, when a friend told me about a dinner conversation he had with his son in the aftermath of the guilty verdict in the Derek Chauvin case last week.

As all the world knows, the former Minneapolis police officer was found guilty of all three counts against him: second- and third-degree murder and second-degree manslaughter.

Before the verdict, Rep. Maxine Waters (D-Calif.) traveled to Minnesota, violated curfew, and declared that Chauvin was “guilty, guilty, guilty.”

Indeed, Waters had earlier insisted that Chauvin be charged with first-degree murder, as if the police officer had intentionally murdered George Floyd with malice aforethought instead of intervening to restrain a drug-crazed felon who, having just attempted to pass a counterfeit $20 bill, was resisting arrest.

Waters also warned that if a verdict for murder were not returned, Minneapolis—and not only Minneapolis—would burn.

The jury barely deliberated before reaching a verdict. They didn’t need to. The trial of Chauvin was a show trial. The result had been preordained.

This was the work of a sedentary lynch mob, not so much angry as intimidated.

As David Horowitz observed, “The speed of the decision was itself evidence that the jury hadn’t deliberated or even considered any of the evidence presented in the trial, as to what actually caused Floyd’s death, whether Chauvin acted in accordance with the standard procedures of the Minneapolis Police Department, and therefore whether there was any malice or inhumane disregard for Floyd’s life involved in Chauvin’s actions.”

Horowitz went on to note that “Derek Chauvin is not a nice man. He is callous, egocentric, and has a record of excessive use of force complaints.”

But, of course, that doesn’t mean that Chauvin murdered Floyd.

“Our system of justice,” Horowitz reminds us, “depends on judging each case on its merits.”

That didn’t happen in the case of Chauvin’s trial. Further Horowitz: “Anyone watching the actual testimony of witnesses and experts would know that the issues in the case were complex, technical, and contested. It would have taken days if not weeks for an open-minded jury to determine whether Chauvin was guilty or not. No one respectful of all the attention put on this case by experts and witnesses on both sides would consider that the three contradictory charges could be lumped together. Only people frightened of disappointing the lynch mob could make that mistake. But the jury was uninterested in the evidence.”

Indeed. Evidence is only wanted when one lacks the pleasing certitude that comes with the conviction of one’s moral election.

What just happened in Minneapolis wasn’t so much a trial as a quasi-religious sacrifice.

There was never any doubt about the outcome of the proceeding.

Which brings me back to Caesar and the fate of the Roman Republic—and to that dinnertime conversation between my friend and his son.

What we are seeing, that smart young man observed, are the growing pains that come with the transition from one form of government to another.

The United States used to be a democratic republic.

Those days are long gone.

We are now well on our way to some form of bureaucratic, socialist-inflected oligarchy.

But whether the resulting polity looks more like Scandinavia or East Germany (or, indeed, Beijing), I predict that the road will be bumpy and architects of our fate imperious.