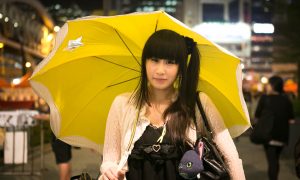 See the original story below.

“Howard,” a 35-year-old Australian Hongkonger who does a mean job impersonating the current North Korean leader, showed up at the protest site in Admiralty on Halloween (Oct. 31), much to the amusement of onlookers.

“I was just in town to pick up my iPhone 6,” said “Kim” to Reuters reporters.

“I support the Umbrella Movement and I support Hong Kong.”

Carrying a banner that references Hong Kong democrats declaration that the region is “not North Korea,” “Kim” got plenty of photo-ops with the crowd, and even sneaked in a photo with prominent student leader Joshua Wong.

“Kim” once starred in a commercial for Israeli burger chain Burgeranch, and nearly made a commercial with former NBA player and real-life Kim Jong-un friend Dennis Rodman.

In an interview with Hong Wrong, “Kim” recounted his experience at the North Korean consulate in Hong Kong:

“When I arrived I just stood there with a stern look and when the Consulate General saw me he got quite the shock, when he saw the cameraman he instantly shouted at us and hid from view and called security on us, meanwhile I was shouting at him in bad Korean saying ‘I am Kim Jong Un.’

“I was hoping to get to go in and take a picture with him, however this guy had no sense of humor… I would have stayed and shot the footage with me and security having a conflict but I had to go to the South Korea and the US embassy before the day was finished.”

Check out the incident in the video below, and “Kim’s” Facebook page here.