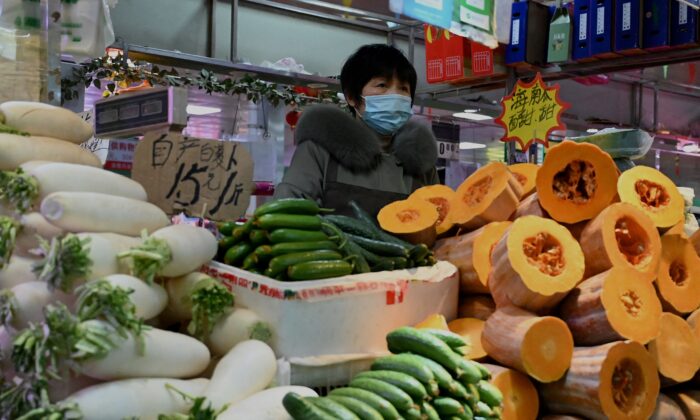 A vegetable vendor waits for customers at a market in Beijing, China on Jan. 17, 2022. (NOEL CELIS/AFP via Getty Images)
Hong Kong

When the western advanced economies are losing control of inflation, China is praising herself as a global stabiliser with inflation staying as low as near two percent. True, China is one of the very few countries that can achieve the usual two percent inflation target at the moment. Nevertheless, we should question why this is the case. Once we learn the true cause to this from this piece, readers may find China will be able to achieve this “excellent inflation target” forever in the future! Notice that for emerging economies, inflation target is commonly set at four percent.

Although China has her capital account closed, its current account is open. This means global inflation should pass through via her imports. This is indeed true given her producer price index (PPI), inflation has been on a high single digit level (actually double digit in late 2021). Domestic money is not scarce where M2 has been growing faster at above 10 percent and M2/GDP ratio has been much higher than in western economies such as U.S. and Europe . The only known reason for consumer price index (CPI) inflation to vanish under these factors, is extraordinarily weak credit.

Trace further, such weak credit is a result of ugly credit futures due mainly to the high debt. When debt is huge enough, any new money available will be paid back to the past, that is,to pay off debt. This is the famous debt deflation argument. Deflation is often accompanied with deleveraging, where assets are sold off to pay back liabilities. The recent well-known examples of massive deleveraging include the financial tsunami after 2008 and Japan’s bubble burst in the 1990s. Comparing China with Japan two decades’ ago, a surprisingly similar inflation trend is seen.

In fact, similar valid charts can be made for population and GDP growth, and the like. Although Japanisation is not confined to any particular country, China shows almost the best similarity thanks to the similar bubbling (before 1990 in Japan and before 2011 in China) and bursting. Even if a massive stimulus is made like that in the U.S.in the aftermath of 2008, it took seven years to recover. If not (like Japan), where it took up to 15-20 years to clear up all the excesses. How long exactly the process takes depends on the severity of bubble as well as whether mistaken policies are applied.

Judging from what China has been doing so far, it seems policymakers are good at achieving the so-called “soft-landing” outcome by avoiding any hard crash. Yet this has both pros and cons. Soft-landing also means slow landing which lengthens the adjustment process. Although this is stable for the political regime, such a prolonged dim outlook generates persistent deflation expectations (two percent low inflation with respect to an equilibrium of four percent). Accordingly, real activities will tend to be delayed where money and credit will fail to boost them.

Price level by itself, is a very important piece of information in economics. Whenever it (or its growth) deviates from the rest of the world by too much, it is a sign of illness or probably a severe sickness.