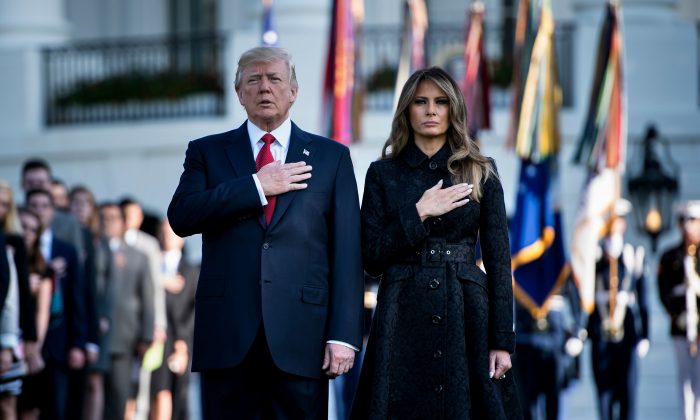 President Donald Trump and First Lady Melania Trump observe a moment of silence on Sept. 11 at the White House in Washington, during an event to commemorate victims of the terrorist attacks on Sept. 11, 2001. (Brendan Smialowski/AFP/Getty Images)
US

On 9/11 Commemoration, Trump Sends Message of Unity and Strength

Trump: 'When America is united, no force on earth can break us apart.'
By Joshua Philipp

A solemn memorial was held in Washington to commemorate the victims and families of the Sept. 11, 2001, terrorist attacks, which killed 2,997 people and injured more than 6,000.

In New York, the World Trade Center was destroyed by terrorists flying planes hijacked from American Airlines, Flight 11 and Flight 175. In Washington, a third plane, Flight 77, was hijacked and crashed into the Pentagon. And a fourth plane, Flight 93, was steered toward Washington but crashed instead in Pennsylvania, after passengers fought back against the hijackers.

“On that day, not only did the world change, but we all changed. Our eyes were opened to the depths of the evil we face,” said President Donald Trump during the ceremony in front of the Pentagon on Sept. 11.

“But in that hour of darkness, we all came together with renewed purpose,” Trump said. “Our differences never looked so small. Our common bonds never felt so strong.

“America does not bend. We do not waver, and we will never, ever, yield. So here at this memorial, with hearts both sad and determined, we honor every hero who keeps us safe and free, and we pledge to work together, to fight together, and to overcome together every enemy and obstacle that’s ever in our path.

“Our values will endure. Our people will thrive. Our nation will prevail. And the memory of our loved ones will never, ever die,” he said. “Thank you. May God bless you. May God forever bless the great United States of America.”

The commemoration ceremony began on the White House lawn, where Trump and first lady Melania Trump bowed their heads as bells rang in memory of those who lost their lives in the attacks. They then placed their hands over their hearts as a band played taps.

As Trump and the first lady reentered the White House, Marines on guard saluted Trump, which he returned with a salute. The two then left for the commemoration’s second half at the Pentagon, where they were joined by Secretary of Defense James Mattis and Joint Chiefs of Staff Chairman Gen. Joseph Dunford.

There, Trump laid his hands on a wreath given for those who lost their lives at the Pentagon and took a moment of silence before U.S. Air Force Chief of Chaplains Maj. Gen. Dondi Costin gave the opening prayers.

Dunford then took the podium. He noted that when the terrorists chose their targets, they did so with an intention. “They were attacking symbols that reflect our way of life and our values,” he said.

“The terrorists believed that these attacks would shake our commitment to those values,” he said. “They were wrong. Instead of retreat, the tragedy produced in us an unyielding resolve.”

Mattis said that on Sept. 11, 2001, “heroism and compassion were boundless” among Americans. “Patriots from all background and all walks of life responded with speed, with courage, and with compassion. In the aftermath of the attack, our service members, our nation, rallied together as one.”

“Maniacs disguised in false religious garb thought by hurting us they could scare us that day,” Mattis said. “But we Americans are not made of cotton candy. We are not seaweed drifting in the current. We are not intimidated by our enemies, and, Mr. President, your military does not scare.”

Addressing the American people, Mattis said, “Your military stands ready and confident to defend this country—this experiment in democracy. And we will continue to do so, using any means necessary and as long as necessary.”

When Trump stepped up to the podium, he took a moment to send prayers to those suffering under Hurricane Irma and in the wake of Hurricane Harvey. He noted that he is dedicating government resources to help those in all places affected.

“When Americans are in need, Americans pull together,” Trump said. “We are one country, and when we face hardship, we emerge closer, stronger, and more determined than ever.”

Trump said the Pentagon stands as a monument “to our national unity and to our strength,” and that for more than seven decades, it has “stood as a global symbol of American might, not only because of the great power contained in these halls, but because of the incredible character of the people who fill them.”

“They secure our freedom. They defend our flag. And they support our courageous troops all around the world,” he said.

When the attacks struck the United States, Trump said, “The living, breathing soul of America wept with grief for every life taken on that day.”

“Here on the West side of the Pentagon, terrorists tried to break our resolve—it’s not gonna happen,” Trump said. “But where they left a mark with fire and rubble, Americans defiantly raised the stars and stripes—our beautiful flag—that for more than two centuries has graced our ships, flown in our skies, and led our brave heroes to victory after victory in battle.”

“The flag that binds us all together as Americans who cherish our values and protect our way of life—the flag that reminds us today of who we are, what we stand for, and why we fight. … Woven into that flag is the story of our resolve,” he said. “We have overcome every challenge—every single challenge, every one of them. We’ve triumphed over every evil and remained united as one nation under God.”

Trump said, “Today, as we stand on this hallowed ground, we are reminded of the timeless truth that when America is united. No force on earth can break us apart.”