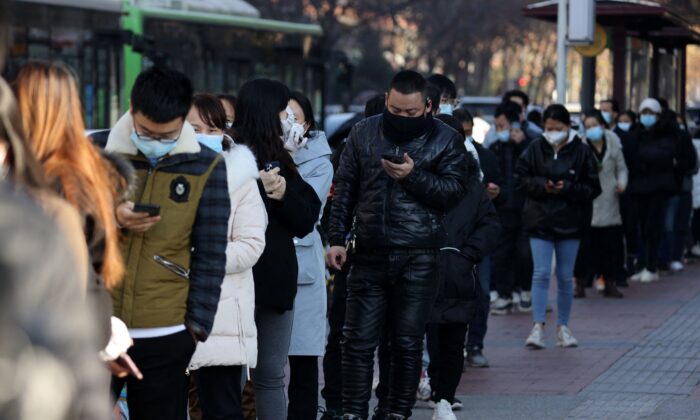 People line up to be tested for COVID-19 in Xi'an, in China's northern Shaanxi Province on Dec. 21, 2021. A surge of new cases raised concerns of wider transmission ahead of a busy travel season. (STR/AFP via Getty Images)
Thinking About China

Omicron is dragging down China’s economic recovery. Cases are rising and the Chinese vaccines are proving ineffective.

The Chinese Communist Party (CCP) has a “zero COVID” policy, but cases have been well above zero since the Omicron outbreak. Omicron is rising, in spite of at least 75 percent of the population being fully vaccinated. Even the third dose of Sinovac vaccine seems to be ineffective against Omicron. As a result, China is poised for a third year of lockdowns and restrictions, which are crippling the economy.

In recent months, Beijing has been increasing social controls. In the city of Xi’an, 13 million residents are under lockdown and 810 local symptomatic COVID-19 cases were reported on Dec. 28. In Inner Mongolia, nearly 10,000 tourists were stranded because of a few dozen cases. Around 33,863 people were locked in Shanghai Disneyland because one person tested positive for COVID. Two Beijing-bound high-speed trains were detained when two crew members were discovered to have been in close proximity of an infected person, and hundreds of passengers were forced into a centralized quarantine. A city in Jiangxi Province shut off the traffic lights, to deter people from driving, after a single case was discovered.

Household pets also suffered. In Inner Mongolia, COVID prevention workers killed the pets of quarantined people whose houses they disinfected. In the cities of Chengdu, Harbin, and Wuxi, authorities entered the homes of the quarantined for the sole purpose of executing their pets.

Cities are still under lockdown, with police roadblocks, school closures, cancelled trains, and millions of COVID tests being carried out. Local officials face punishment if cases are found in their area. Consequently, many have taken a harsh approach to combating the disease. Heihe, a city in northern China, has declared a “people’s war,” offering rewards of up to $15,600 for residents who inform on those who violate the restrictions.

Pharmacies that sell fever-reducing medicines are required to register the names of the purchasers in a virus-tracking database, or risk losing their license. Citizens who test positive and then fail to report to a fever clinic can be prosecuted.

Chinese authorities are not only quarantining people who were in direct contact with an infected person, but also their secondary contacts. The new tracing rules even extend to people who were in the general vicinity of an infected person. Mobile phone apps are being used to test and quarantine people who passed through areas of potential infection. In Chengdu, 82,000 people were brought in for testing because their mobile phones had been within 800 meters of a suspected case, for a period of 10 minutes or more.

Beijing’s failed attempts to eliminate the virus should be proof, after two years, that management, rather than eradication, is the appropriate strategy. Countries such as Australia and Singapore have given up on “zero COVID” policies, realizing they could not remain locked down forever. China, however, is continuing with periodic lockdowns and repeated disruptions to the economy. The country is also closing itself off to the world, by restricting tourism and freight shipments.

A Delta Air Lines flight was forced to turn around, midway between Seattle and Shanghai, because COVID rules had changed in China. This caused havoc when the plane landed in the United States, as some passengers had expired visas and COVID tests and theoretically could not reenter the United States. Beijing has determined to keep international flight arrivals at 2.2 percent of pre-COVID levels, and new arrivals must quarantine for 14 days. Even returning Chinese citizens must complete a mountain of paperwork and submit themselves to multiple COVID tests. As for outbound tourism, the government has almost completely stopped issuing new passports.

The costs of China’s “zero COVID” have been astronomical. The borders have been effectively closed for nearly two years. Countries like Mongolia and Kazakhstan, which trade heavily with China, have suffered. In 2019, Mongolia depended on China for 33 percent of its imports, 89.1 percent of its exports, and 64.4 percent of its total trade. In 2020, when the border was closed, Mongolia’s exports to China decreased to 68 percent while imports remained at 35.2 percent. And this was because mineral exports dropped by about 30 percent compared to the same period in 2019. In Kazakhstan, people are enduring economic losses in both the export and import sectors, while tens of thousands of empty containers sit on the border. China has periodically closed seaports due to a single case, wreaking havoc on the global supply chain.

Chinese leader Xi Jinping was already leading a tech crackdown, while the country was facing a real estate crisis. New construction in places like Zhejiang, which have come under repeated lockdowns, has slowed. Meanwhile, housing prices have been in steady decline as a result of a sluggish economy.

Retail growth is decelerating, falling short of Beijing’s projections. Unemployment is high, at 5 percent, not counting millions of migrant workers who may have lost their jobs in factories. Analysts expect the weak economy to continue into the new year, particularly if the CCP continues with the “zero COVID” policy. To soften the blow, the People’s Bank of China is planning to release $188 billion of liquidity into the banking system. This will increase China’s debt, which already stands at more than 300 percent of GDP.

In 2019, tourism accounted for nearly 12 percent of China’s total GDP. Domestic tourism alone was a $942 billion industry, providing a livelihood for about 30 million people. In 2020, tourism dropped by roughly 60 percent; and with continued restrictions, there is no expectation that it will recover in 2022.

In spite of China’s “zero COVID” regimen, the CCP plans to move ahead with the Winter Olympics. The central authorities have asked city governments to construct mass quarantine facilities for thousands of overseas arrivals. The quarantine and testing regimen is unlikely to inspire a revival of tourism.