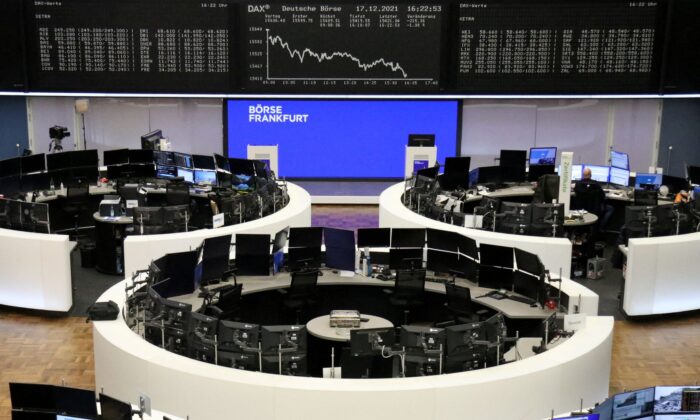 The German share price index DAX graph is pictured at the stock exchange in Frankfurt, Germany, on Dec. 17, 2021. (Staff/Reuters)
Markets

European stocks fell more than 2 percent on Monday amid a global sell-off in equities, with investors fretting over the spectre of tighter pandemic curbs hitting the global economy as cases of the Omicron COVID-19 variant surge.

The pan-European STOXX 600 was down 2.2 percent, falling to its lowest in more than two weeks.

Travel, oil, and auto stocks led declines with losses of more than 3 percent, with all the major subsectors in the red.

“The rate at which the virus is picking up is increasing fears that governments are going to bring in tighter restrictions which could curtail movement and hamper economic activity,” said David Madden, market analyst at CMC Markets UK.

The Netherlands imposed a lockdown on Sunday, while the prospect of tighter COVID-19 measures ahead of the Christmas and New Year holidays looms large over several European countries amid the swift spread of Omicron.

Madden added that lower liquidity in the last weeks of December could also be leading to the exacerbated moves.

Last week, the STOXX 600 rallied after the European Central Bank promised continued economic support and the U.S. Federal Reserve flagged a long-awaited end to its pandemic-era stimulus in March, while delivering an upbeat outlook.

Meanwhile, futures tracking the U.S. stocks benchmark S&P 500 skid 1.8 percent after U.S. Senator Joe Manchin, a moderate Democrat who is key to President Joe Biden’s hopes of passing a $1.75 trillion domestic investment bill, said on Sunday he would not support the package.

Goldman Sachs cut U.S. real GDP forecast for the first quarter of 2022 to 2 percent versus 3 percent previously, and marginally reduced forecasts for the second and third quarters.

Shares in argenx leaped 8.2 percent to the top of the benchmark after the Belgian group reached a regulatory milestone for its receptor blocker.

The worst performer, however, was Novo Nordisk, which plunged 10.8 percent after the Danish drugmaker said it would not be able to meet demand for its new obesity drug due to U.S. supply issues.

BNP Paribas slipped 0.6 percent after the French lender agreed to sell its U.S. unit, Bank of the West, to Canada’s BMO Financial Group for around $16.3 billion.

Sweden’s BillerudKorsnas dropped 6.9 percent after saying it would buy U.S.-based coated paper producer Verso for around $825 million in cash as the pulp and paper manufacturer looks to expand into North America.