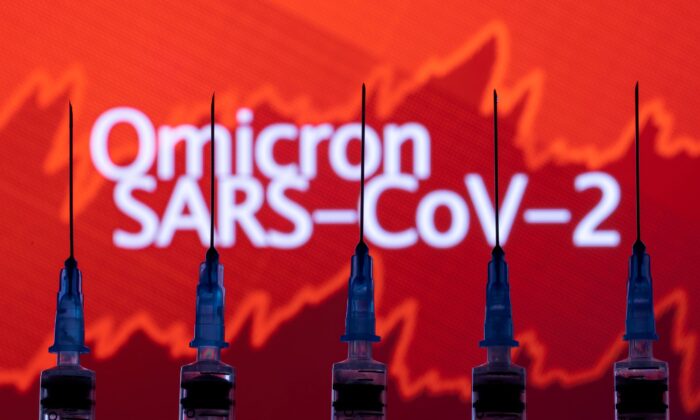 Syringes with needles are seen in front of a displayed stock graph and words "Omicron SARS-CoV-2" in this illustration taken, on Nov. 27, 2021. (Dado Ruvic/Illustration/Reuters)
Markets

LONDON—As global markets fell last week on news of the new Omicron coronavirus variant, one cryptocurrency with the same name soared after the Greek letter entered the investor lexicon.

The price of the hitherto-obscure digital token, whose Twitter feed has little more than 1,000 followers, rose almost ten-fold from Friday to Monday morning when it hit $688, before tumbling as much as 75 percent, crypto tracker CoinGecko said.

Omicron the token, which its website describes as “a decentralized treasury-backed currency protocol,” was trading at about $371 at 1435 GMT. On Thursday it was worth about $65.

The World Health Organization, which on Friday named the new COVID-19 variant Omicron, said as more countries reported cases it carries a “very high” global risk of surges, although scientists have said it could take weeks to understand its severity.

Bitcoin suffered its worst day in two months on Friday, dropping by more than 8 percent as investors dumped stocks and other riskier assets in favour of perceived safe havens like the dollar. It has since recovered nearly all of its losses, with global markets gaining a semblance of calm on Monday.

From “squid game” to dogecoin, minor cryptocurrencies have this year benefitted from links to memes or web culture, recording rapid booms and busts while more mainstream names such as bitcoin soar in popularity.

It was not clear when the Omicron token was launched. Data on its price at CoinGecko was only available from Nov. 8, while a Telegram channel under the name OmicDAO was launched a day earlier.

Reuters was not able to reach anyone representing Omicron for comment.