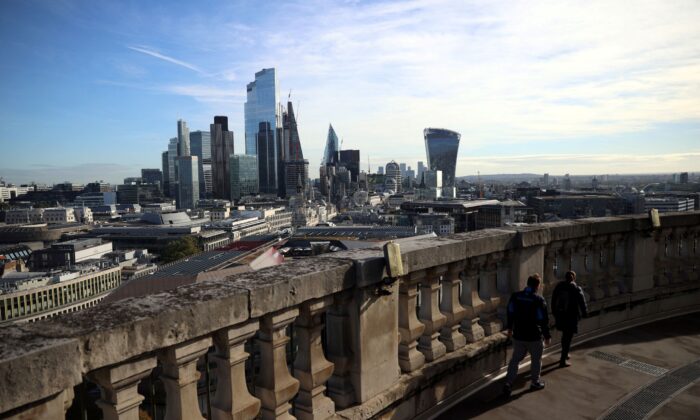 People look out to the City of London financial district from a viewing platform in London, Britain, on Oct. 22, 2021. (Hannah McKay/Reuters)
Economy

LONDON—British businesses grew at the slowest pace since April 2021 during the past three months, after demand for face-to-face services slumped due to the Omicron variant of coronavirus, the Confederation of British Industry said on Sunday.

Britain’s economy only recovered to its pre-pandemic size in November, before being hit by the highly infectious Omicron variant which led to government advice to work from home and restrictions on hospitality in Scotland and Wales.

The CBI’s monthly growth index—which is based on quarterly growth rates from its previously published surveys of manufacturers, retailers, and other services businesses—fell to +12 in January from +21 in December.

That was the lowest reading since April, which covered a three-month period when pubs, restaurants, and non-essential retailers were largely closed due to a previous COVID-19 wave.

COVID-19 cases in Britain have fallen sharply since a peak in early January, and most economists think output will soon recover.

But there are headwinds for many businesses from sharply rising inflation, which hit its highest in nearly 30 years in December and is forecast to exceed 6 percent in April when regulated household energy bills rise.

“Consumer-facing firms will also have to contend with a deepening squeeze on household budgets,” Paleja said.

The Bank of England is expected to raise interest rates on Thursday to 0.5 percent from 0.25 percent, the second increase in less than two months.