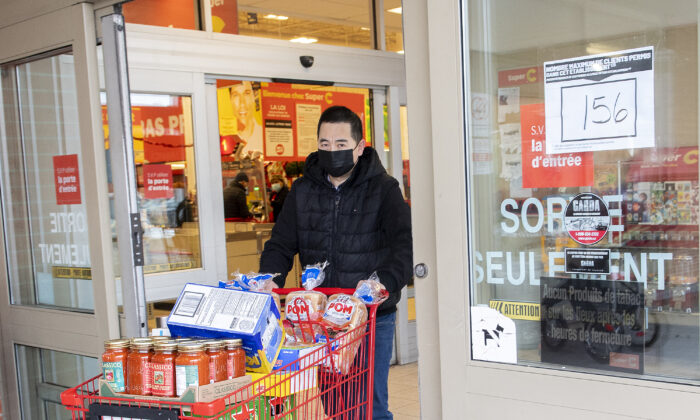 A man walks by a sign indicating reduced capacity at a grocery store in Montreal on Dec. 20, 2021, as measures reducing capacity for stores, bars, restaurants, and gyms come into effect in Quebec. (The Canadian Press/Graham Hughes)
Viewpoints

Omicron: Leaders Should Respond With Cautious Optimism, Not Fearmongering and More Restrictions

If one heeds nothing but the headlines in the legacy media, one would be certain the Omicron variant will herald nothing short of Armageddon. Bold declarations of doom abound, while myriad guest experts demand more government restrictions.

In most areas, governments are obliging and restrictions on freedoms are being imposed yet again. Events are being cancelled, businesses are being restricted. Canada’s borders haven’t been closed, but as federal officials recommend citizens stay home, there is an unspoken “yet” to be heard.

Daily case counts are hitting new records in most provinces. News presenters breathlessly report on how explosive the spread of COVID-19 has been, and point to modelling demonstrating a likelihood of mass infection as we haven’t seen yet in this now two-year-old pandemic journey.

No measures are too stringent in the battle against this dreaded new variant, right?

When one reads beyond the doomsaying headlines, however, they see a different picture.

While Omicron is proving to be quite virulent, it is also proving to have the mildest of symptoms when compared to other COVID-19 variants of concern to date. Rather than attacking the lungs and breathing ability of people as previous variants have, Omicron so far appears to behave more like the common cold. People are either asymptomatic or are reporting minor symptoms such as nasal congestion and sore throats. Hospitalizations are exceedingly rare with Omicron infections.

Politicians and medical experts can be forgiven for their initial, panicked reaction when Omicron showed up on the horizon. The infectious nature of the new variant was immediately apparent as it spread quickly. If it proved to be as harmful as previous variants, our health-care facilities were sure to be overwhelmed. We watched and waited with apprehension.

It has been nearly a month now since Omicron appeared in Europe and we can’t keep pretending that we don’t know how this variant will present itself. Tens of thousands of cases have been confirmed with only a handful of deaths. As far as new variants go, we appear to have gotten lucky. While Omicron is spreading rapidly, it just isn’t harming people.

In Canada, the pattern is shaping up to be the same way. While confirmed cases in Ontario have neared 10,000 per day, less than 500 remain in hospital and many of those may be from different variants. Quebec is seeing hospitalization numbers rising but not nearly on par with the rise of cases.

The data is coming in and doctors sound almost grudging as they admit Omicron isn’t as dangerous as they thought it might be. The new variant may be up to 70 percent less likely to hospitalize somebody than other variants were, according to a recent study by the UK Health Security Agency cited by the UK health secretary on Dec. 24. If a person is healthy and vaccinated, the chances of hospitalization from Omicron appear to be next to none.

A new study published in Science Daily found that a person who has been vaccinated and then had a breakthrough infection can have as much as 1,000 percent more antibody protection against future infections than through vaccination alone. The coming of the Omicron variant may actually spell the beginning of the end of the pandemic. What more could we hope for than a variant with high transmissibility and low morbidity?

So why aren’t our leaders responding with cautious jubilation? Why can’t we hear something positive for a change?

Fearmongering draws clicks, and our legacy media has trained itself to always report from the most negative perspective possible. People are fed fear daily and respond by demanding that their political leaders do something about it.

Under public pressure, political leaders respond by doing the only thing they know—they restrict freedoms.

It doesn’t matter how arbitrary or ineffective government measures to quell infection rates may be, what is important to political leaders is that they appear to be doing something.

We have a growing, unreasonable zero-risk expectation when it comes to the pandemic. Every death gets laid at the feet of the government even if there was utterly nothing the government could have done to prevent it.

Unless citizens start speaking out and pushing back against unnecessary panic and restrictions being imposed every time a new infection appears, we may never return to any semblance of normalcy again. I wish I felt confident that people are ready to stand up for themselves, but so far, it appears that the majority prefer to be locked down over any risk no matter how trivial.

Let’s hope folks wake up in 2022 because we can’t afford to continue down this road much longer.