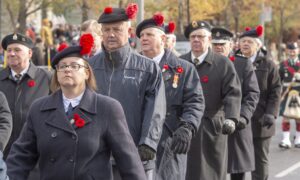 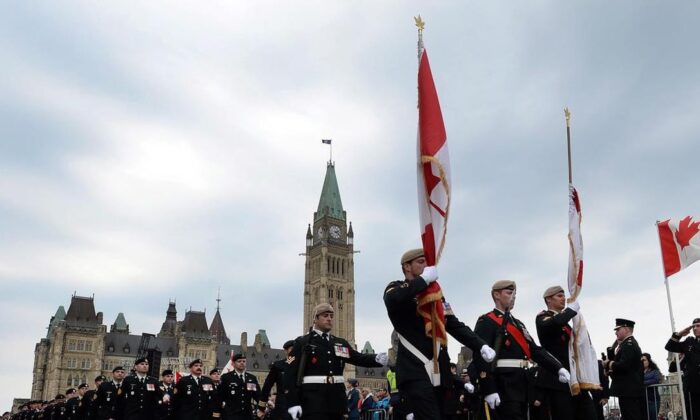 Soldiers parade from Parliament Hill as they take part in the National Day of Honour in Ottawa on May 9, 2014. Canada’s veterans ombudsman is calling on the federal government reverse to restrictions on the provision of mental-health services for the families of retired military personnel. (Sean Kilpatrick/The Canadian Press)
Canada

OTTAWA—Canada’s veterans ombudsman is calling on the federal government to reverse recent restrictions on the provision of mental-health support to members of veterans’ families who need treatment because of their loved one’s service in uniform.

The demand from ombudsman Nishika Jardine is in a scathing report released Tuesday, one year after Ottawa imposed the restrictions following outrage over Veterans Affairs Canada having paid for Christopher Garnier’s counselling sessions.

The son of a veteran, Garnier was convicted in 2017 of having murdered an off-duty police officer in Halifax and was in prison at the time his treatment for post-traumatic stress disorder was being covered by the government.

The Liberal government responded to the controversy by ordering Veterans Affairs staff to take a second look before approving funds and services for veterans’ families, particularly those convicted of serious crimes.

Family members can now only get federal support if their own treatment aids the recovery of a relative who served in uniform, and if the treatment is set up by the veteran’s doctor. They are also only allowed 25 sessions per year, and can’t see more than one professional at a time.

Jardine’s report suggests the new restrictions have harmed many veterans’ families, who the ombudsman says face unique challenges such as constant moves and long separations.

There is also the stress that comes from knowing a loved one is deployed on a potentially dangerous mission, and the many difficulties that come from living with someone who has returned and is now suffering from physical and mental injuries.

“To be really crystal clear, we’re talking about when their mental-health issues can be clearly linked to their being part of a military family,” Jardine said in an interview.

“We’ve come to agree to acknowledge that when a military member serves or a veteran has served, that their family serves right alongside them.”

The report quotes a disabled veteran whose young child had started having panic attacks after Ottawa cut their support and the wife of a veteran suffering from PTSD and whose children have similarly been able to access support only with federal help.

“How do you give this to them? They seek counselling to help them understand via age-appropriate methods and skills that are beyond my scope as a mother.”

Some of those quoted also questioned how the government could justify the restrictions when Canadian Armed Forces commanders have repeatedly stressed how supporting military families at home contributes to successful missions abroad.

The ombudsman’s report criticizes how the government rolled out the new restrictions without notifying or consulting with families, many of whom found out about the changes from their doctors and psychologists.

“It was to those family members to find out that partway through their treatment, that the treatment isn’t going to be able to be continued,” Jardine told The Canadian Press.

The ombudsman notes that one of her predecessors first called on the government in 2016 to provide more mental-health support to veterans’ families and describes the issue as a matter of fairness.

“The provision of mental-health care to family members is an issue of fair outcomes in that service-related needs are not being met by current programs,” the report says.

In a letter to Jardine on Tuesday, Veterans Affairs Minister Lawrence MacAulay suggested the department did not have the authority to “offer funding for treatment benefits for a veteran’s family member in their own right.”

While MacAulay left the door open to expanding the department’s authority, he emphasized that Veterans Affairs would look at “alternative resources? and be as flexible as possible where it can”Canada’s veterans ombudsman while considering what new measures might be needed.

The letter was provided to The Canadian Press by MacAulay’s office.