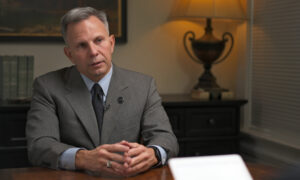 If we measure a navy’s size solely by the number of battle-ready ships and submarines, China has the largest navy in the world, according to the Department of Defense. While China continues to grow and modernize its naval capabilities, the U.S. Navy has suffered decades of cuts to shipbuilding and maintenance, according to Russ Vought, Director of the U.S. Office of Management and Budget (OMB).

In this episode, we sit down with Director Vought to discuss the Trump administration’s plan to grow the U.S. Navy, and how to pay for it.

We also discuss the OMB’s leadership on defunding critical race theory-based trainings in the federal government.

Jan Jekielek: Russ Vought, great to have you back on American Thought Leaders.

Director Russ Vought: Good to be back.

Mr. Jekielek: You had an op-ed in the Wall Street Journal recently that really caught my attention with the National Security Adviser, Robert O’Brien, about the plan to build out the U.S. Navy. It sounds like an unprecedented effort. I want to give you a chance to talk about that.

Dir. Vought: Sure, it’s a very substantial plan. For the first time, this administration is putting forward something that the President has long promised, and we’re putting forward a plan to actually achieve it. We’ve made progress each and every year to be able to build our Navy back to what it has been—to achieve maritime supremacy.

But in terms of putting forward a 30-year shipbuilding plan, and then providing the requisite amounts of resources that we believe will be needed to pay for it, we believe that’s going to be the thing that Congress is most wanting to be able to determine: whether we can afford it as a country. My role as the budget director is to provide that kind of plan and detail, to be able to assuage those concerns.

Mr. Jekielek: I understand that you’ve actually been traveling around the country, going to shipyards, and figuring out what’s actually doable.

Dir. Vought: Sure. One of the things in terms of establishing maritime supremacy and determining what’s required is to see whether we can actually get it done. Can the shipyards carry the load? What is necessary from the standpoint of our military leaders?

So I did tour a number of the shipyards over the summer to figure out what they could build if there’s a bipartisan consensus to actually move forward with these kinds of procurement resources. I have found at every opportunity that there’s an American business community that can ramp up, if the resources are there. And so this is something that we were really excited to put forward last week.

Dir. Vought: We put this forward. In terms of the 30 year shipbuilding as requested by Congress, we provided something that’s not normally provided—a fiscal framework to be able to show that it could be affordable. That has been the main question that the Hill has had, “Okay, you want a bigger Navy, you want to go to 355 ships, go to 400 battle force ships—how are you going to pay for it?” We put forward the detailed numbers to do that, because the debate is happening right now. We can’t wait till the future to have that debate about what resources we need. If we get a chance to set up another budget in February, this will, of course, be included in that in that budget down the road.

Mr. Jekielek: So bottom line, where’s the money coming from?

Dir. Vought: We achieve savings by ending endless wars. We’re already, as a result of going down to 2500 troops in Afghanistan and Iraq, achieving savings in what’s called the Overseas Contingency Operations Fund [OCO]. We’ve achieved about $35 billion dollars in savings there. We also began to limit our growth in military personnel, that is about a third of all defense spending right now. We began to cap Army end-strength, because of what’s not needed overseas, these increased deployments that the President has pulled back on.

Mr. Jekielek: And this is part of this “peace through strength” framework which the administration has been championing, right?

Dir. Vought: It is. We want to achieve maritime superiority. If you look back in history at all the great countries like the United States—you saw the chairman of the Joint Chiefs of Staff say it two weeks ago—they are maritime nations. Even as an Army guy, he saw the priority of that in being able to make sure of that, as we orient the fight towards great power competition. In particular, the previous Secretary of Defense referred to China as our pacing threat. As we try to think through what’s necessary for that fight, an increased Navy is first and foremost.

Mr. Jekielek: There’s another thing I’ve been wanting to talk to you about for a while. This executive order that you played a big role in implementing—an executive order on combating race and sex stereotyping. I can’t remember exactly how long ago, but a number of months ago, this executive order came through. It started with a memo that you wrote, and it’s gotten pushback. People have said that it’s anti-diversity training or something like this. How has the implementation been and what’s the idea behind this?

Dir. Vought: The implementation is going well, right now. The first step that you mentioned in the memo was to halt and cease and desist all federal funding of what we viewed as un-American training—diversity training. That does not mean that this president is opposed to all diversity training. What we mean by it is the diversity training that promulgates primarily two viewpoints.

Number one: that this country is fundamentally flawed, that its founding was flawed, and that it is systemically flawed. Even though we have had problems that we have had to address, this is the most freedom-loving country the world has ever seen. The second proposition that we believe is un-American is that all white people are systemically flawed and racist. That because of their skin color, they are therefore racist. That if they are participating in a diversity training program they need to ask for forgiveness, or have a different posture, vis-a-vis their colleagues, as a result of their skin color. Those two things are what this president has said, “Look, we’re not going to be having federal training programs that espouse those two viewpoints.”

Dir. Vought: Correct. Yes. Critical race theory is the academic framework for this body of work that has seeped into the federal government.

Mr. Jekielek: What is the impact that you’ve seen? Why do you feel this is such a threat, really?

Dir. Vought: Well, just for a bottom line, anytime you have federal workers that are being taught not to love their country, not to have a philosophy that says all skin colors are equal, and to have that approach, we think that’s very damaging for the country.

Mr. Jekielek: I see. So, as I heard from a number of people, there was a lot of pushback from various agencies, because some of it was people saying, “This is anti-diversity training.” You said the implementation has gone well, but what does that actually mean on the ground? And what does the pushback look like?

Dir. Vought: Well, at the beginning, we were trying to find these instances. There was a belief at the bureaucracy level that this president was not serious to the extent that they had trainings that were already scheduled. We had to begin to pull those down and to say, “No, the president is serious about this; it’s not just the memo that I put forth.” He then followed up with an executive order. Any opportunity that we found, any example that we found, we were able to pull down.

And as a result, we’ve not heard any additional examples of people trying to override the policy or trying to get away with it. So I think it’s going well. Where we are right now in terms of implementation is trying to make sure that it applies to grants and federal contracts. That involves making sure that new contracts are consistent with the executive order and making sure that the grants that are struck have language in there that make them consistent with the present EO [Executive Order].

Mr. Jekielek: From your perspective, what is the broader social impact of all this happening? I know you’ve been a bit vocal about this.

Dir. Vought: The reason why I think this is such an important issue is that we’ve had over the last several months, particularly over the summer, great violence and chaos and anarchy in our cities. That comes from a worldview perspective. That comes from a belief which critical race theory espouses—that when the system is flawed, it needs to be pulled down. When your institutions are flawed, they need to be pulled down. So why not light your cities and towns on fire, if there’s that kind of systemic problem?

Mr. Jekielek: All right, any final thoughts before we finish up?

Dir. Vought: No, it’s great to catch up and  I love all the work that you are doing.

Mr. Jekielek: Thanks a lot. It’s such a pleasure to have you on again.