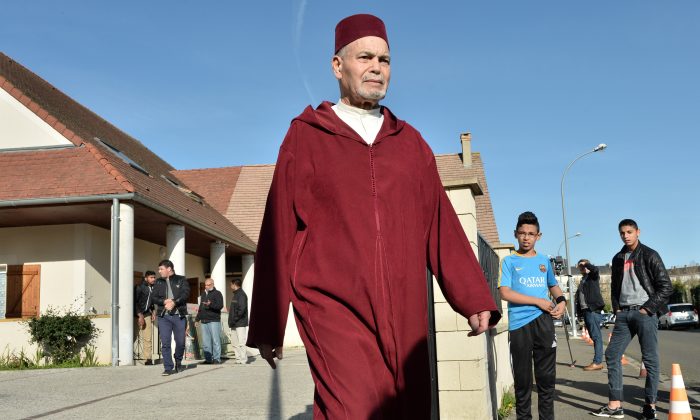 Muslims leave the mosque after the prayer in Luce, near Chartres, on November 15, 2015. Omar Ismail Mostefai, the first gunman identified from the November 13 attacks in Paris, frequented the Luce mosque. (AFP/Getty Images)
Europe

The deputy mayor of Chatres, France identified a 29-year-old as one of the Paris terror attack gunmen.

Jean-Pierre Gorges says that Omar Ismail Mostefai was one of the gunmen in the attacks, which left over 100 people dead and hundreds of others wounded.

Mostefai lived in Chartres, which is about 100 miles (90 kilometers) southwest of Paris, until 2012.

Mostefai is the first, and so far the only, attacker to be named by police. His brother, father, and sister-in-law have been brought in for questioning by French police.

But his brother, 34, told AFP that he had not seen Mostefai for several years, with his whereabouts unclear after he moved from Chartres.

“It’s crazy, insane. I was in Paris myself last night, I saw what a mess it was,” he said.

His brother thought that Mostefai had moved with his family and young daughter to Algeria. A source told the outlet, though, that Mostefai regularly attended a mosque in Luce, close to Chatres.

Mostefai was identified after his severed finger was found at the Bataclan Theatre, one of the places where the attackers hit.

Police believe Mostefai may have recently traveled to Syria, and are questioning his wife about this and other inquiries.

Mostefai was found among the wreckage of Bataclan, which he and the two other gunmen took down by blowing themselves up after a hostage situation and a firefight with police.