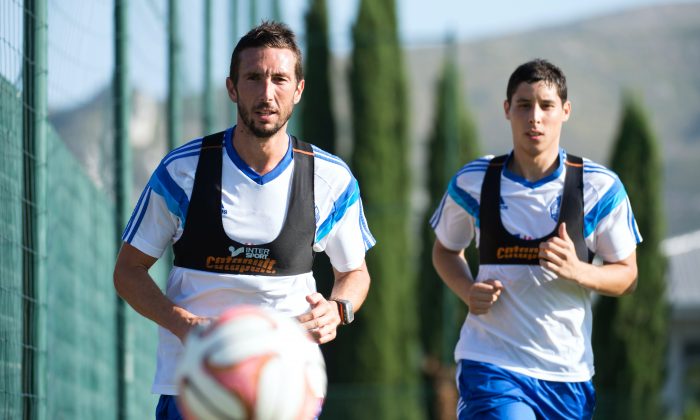 Olympique Marseille and Montpellier are set to face off in a Ligue 1 match on Sunday, August 17.

The game will be broadcast on beIN Sports 1 in France, as well as ESPN UK/HD and BT Sport 2 in the United Kingdom.

Live streaming is available on beIN SPORTS CONNECT (US, FR).

See an AP preview of the Ligue 1 matches this weekend.

PARIS (AP) — Even after getting two goals from Zlatan Ibrahimovic last week, Paris Saint-Germain is still looking for its first win of the season in the French league.

The defending champions will get another chance on Saturday when they host Bastia, while Monaco will also be looking for its first win against Bordeaux on Sunday.

PSG drew 2-2 with Reims on the opening weekend, with both of its goals coming from the Sweden striker. Monaco, which finished second last year but lost James Rodriguez to Real Madrid this season, fell to Lorient 2-1.

TOO MUCH, TOO SOON?

PSG defender Thiago Silva is sidelined for several weeks after picking up a right hamstring injury in a friendly on Monday.

“People talk a lot about that injury,” PSG coach Laurent Blanc said. “Whose fault is it? I’ll take the blame.”

Silva didn’t have much time to recover from the World Cup. Blanc said the club sent a physical trainer to Brazil so that Silva could build up fitness from July 24.

Despite playing the match for third place on July 12, Silva was quickly back on the field, starting the French league match against Reims before facing Napoli on Monday.

Laurent Blanc and Claude Makelele were teammates at Marseille in the 1997-98 season, and Makelele was still an assistant coach at PSG a few months ago. But in May, he accepted a job as coach at Bastia.

“There was a bit of a surprise,” Blanc said about Makelele’s departure. “We didn’t expect that. We were about to work together again for another year or two … We would have liked him to continue with us because we got along very well.”

Monaco has struggled to adjust to the new tactics imposed by Jardim.

“We didn’t manage to execute what we’ve been working on for a month,” Monaco forward Valere Germain said.

Jardim led Sporting to a runner-up finish in the Portuguese league last season before replacing Italian coach Claudio Ranieri at Monaco in June.

IS SUPER DARIO BACK?

Dario Cvitanich got off to a strong start by scoring twice in the 3-2 win over Toulouse last Saturday.

“I’ve prepared well this season to come back stronger, improve aspects of my game, especially the physical one, and be more lucid in front of the net,” Cvitanich said.

Cvitanich led Nice to a fourth-place finish a year ago by becoming the second scorer in the league with 19 goals. But the Argentine striker was less efficient last season, netting only eight goals as Nice wound up 17th.

Lyon was missing seven regular starters last weekend through injury or suspension. But it didn’t matter because Lyon has so much talent in its football academy that 11 of the 14 players involved in the 2-0 win over Rennes are homegrown.

Lyon was a dominant club in the previous decade, winning seven straight league titles. However, it has significantly trimmed its payroll in the past seasons, losing star players and relying instead on youngsters from its football academy.