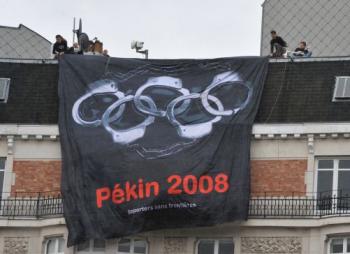 Reporters Without Borders replaced the rings in the traditional Olympics logo with handcuffs as part of a campaign to call for a boycott of the Beijing Olympic Games. (Dominique Faget/AFP/Getty Images))
International

Ben Bendig
View profile
Follow
biggersmaller
Print
The five interlocking rings that are the time-honored symbol of the Olympic Games have had a strange career at these games. The host has chosen to use the instantly recognizable logo sparingly, while critics of the Chinese regime have adopted it, using it for their own purposes.

Canada’s Globe and Mail reports that the Beijing Olympic Committee has preferred replacing the five rings with their “Beijing 2008” logo.

In a newsletter carrying the headline “The IOC Must Be Seething,” prominent economist Donald Straszheim states, “It takes a detective to find the internationally familiar and usually ubiquitous Olympic rings at the airport. This is utterly unlike any other modern Olympic Games that I have attended.”

[caption id=”attachment_71749″ align=”alignleft” width=”320″ caption=”Inside the rings are pictures representing different ways the Chinese regime has failed the Chinese people. From left to right, peace (a dove), democracy (an image of the