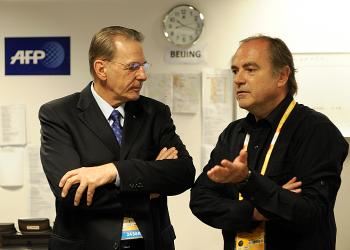 Olympic Press Briefing Cancelled, at Least for a Day

Beijing organizers claim the games are running smoothly so there is no need for a press briefing but reporters have been hounding organizers and the IOC about controversies surrounding the Games.
Emmanuelle Moreau with the IOC said the decision to cancel the briefing was made jointly by the IOC and Chinese Olympic officials.

Canadian Press has reported that reporters in Beijing have been aggressively questioning Chinese officials and the IOC about air quality, pro-Tibet protests, press freedom issues and other non-sport related matters.

One British reporter asked IOC spokesperson Giselle Davies five times whether the IOC was “embarrassed” about giving China the games.

While Davies would only comment on the logistical success of the games, embarrassing contraversies have made the Beijing Olympics a public relations minefield.

Revelations of a fake opening ceremony singer, fake fire works, and fake spectators (volunteer cheer squads are being used to fill empty seats in so-called “sold-out” events) coupled with broken Olympic promises to improve human rights and media freedom have plagued what was supposed to be the Chinese regime’s greatest propaganda feat yet.

“You have to wonder if China fully realized what it was getting into when it agreed to let 20,000 journalists in to cover the Games,” questions Allen Panzeri in Thursday’s National Post.

Tensions between the press and the IOC and Chinese Olympic spokespeople came to a boil after the transcript of a particularly confrontational briefing on Thursday was delayed several hours and cut in half, with sharp questions over China’s broken promises omitted. The Chinese translation was trimmed even further.