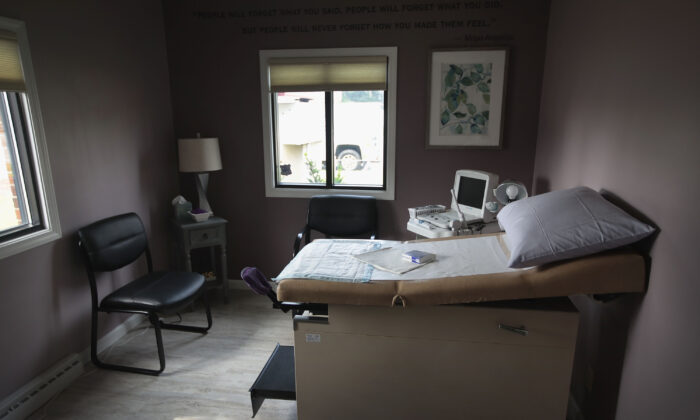 An ultrasound machine sits next to an exam table in an examination room at Whole Woman's Health of South Bend in South Bend, Ind., on June 19, 2019. (Scott Olson/Getty Images)
US News

The Oklahoma Supreme Court on Monday issued a temporary block on three pro-life laws that were set to go into effect on Nov. 1.

In a 5–3 ruling the court blocked a law that would have only allowed obstetricians and gynecologists to carry out abortions. The same law also mandates abortions after the first trimester take place in a hospital.

Under the laws, physicians administering abortion pills would be required to verify that the patient is less than 10 weeks into gestation.

Additionally, clinicians would also have to ensure patients do not have any conditions that put them at higher risk of developing hemorrhages or infections after taking abortion pills.

That includes ruling out ectopic pregnancies; medical conditions involving the adrenal glands; people prone to bleeding from taking anticoagulant drugs or having a blood disorder; and those undergoing long term corticosteroid therapy.

Furthermore SB 779 also needs physicians to maintain hospital admitting privileges or ensure that the patient has access to a physician who holds those privileges should the patient require further medical care.

The lawsuit was filed by Planned Parenthood, Oklahoma Call for Reproductive Justice, and Tulsa Women’s Reproductive Clinic, among other organizations.

The court also extended the block on HB 1102 and HB 2441, the latter of which would make it illegal for physicians to offer abortion without scanning for a heartbeat, and that once a heartbeat is detected, an abortion could not be legally carried out unless the pregnancy may prove detrimental for the woman.

“This is simple and straightforward, but essential to Oklahoma’s efforts to protect the unborn,” said Sen. Julie Daniels in an April statement, when the bills were initially approved. “The child’s heartbeat is proof of life. This bill provides the legal authority necessary to protect and save that life.”

According to the Center for Reproductive Rights, the laws would have prevented half of the abortion providers in Oklahoma from providing abortions.

The Center for Reproductive Rights criticized the hospital “admitting privileges” clause as well as the ultrasound requirement, which it said would “require patients to make two separate trips to a health care provider at least 72 hours apart that would subject patients to significant delays in care.”

In the same statement the organization also said that “clinics in Oklahoma have reported huge increases in patients traveling from Texas to access care” following new Texas abortion laws preventing abortions after six weeks of pregnancy.