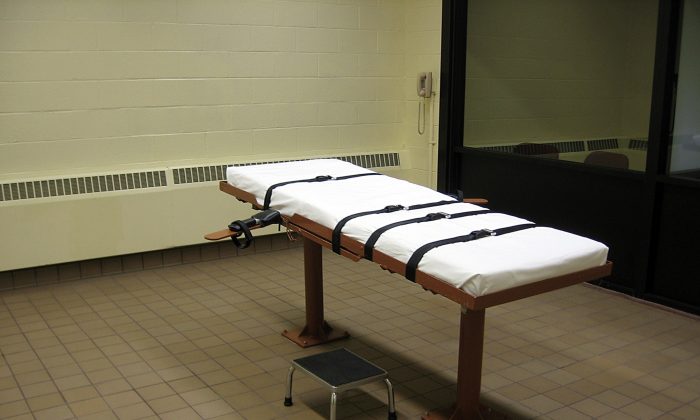 The witness room facing the execution chamber of the "death house" at the Southern Ohio Correctional Facility in Lucasville, Ohio, on Nov. 2009. (Caroline Groussain/AFP/Getty Images)
Judiciary

Oklahoma must postpone the executions of John Grant and Julius Jones while a legal challenge to the state’s lethal injection protocol is adjudicated, a three-judge panel of the United States Court of Appeals for the Tenth Circuit ruled on Wednesday.

The execution of Grant, which was scheduled for 4 p.m. on Thursday, will now only go forward if the United States Supreme Court overturns the appellate panel’s ruling. The state has not yet said whether it will appeal the ruling to the country’s highest court.

In ordering the state to delay the executions of Grant and Jones, whose execution was to be held on Nov. 28, the judges said that a lower court had unfairly denied the two delays granted to numerous other defendants pursuing a lawsuit challenging the constitutionality of the state’s three-drug lethal injection protocol.

Thirty-six U.S. states and the District of Columbia have either abolished the death penalty or have not carried out an execution in the past 10 years, according to the Death Penalty Information Center.

Oklahoma has not carried out executions in six years, since three botched attempts ending with the death of Charles Frederick Warner in 2015. Warner, who was convicted of the rape and murder of an 11-month-old baby, was executed using the wrong drug, officials said later.

The previous year, Clayton Lockett, convicted of murder, rape, and kidnapping, regained consciousness and raised his head after the execution procedure began, only to die in apparent anguish less than an hour later, court records show.