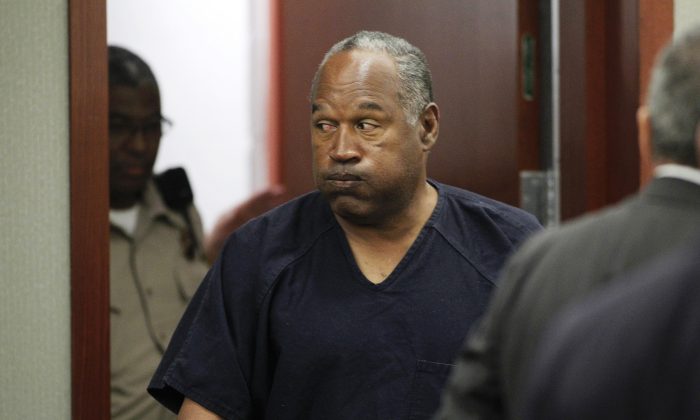 O.J. Simpson in court in May 2013. (Steve Marcus-Pool/Getty Images)
Crime and Incidents

OJ Simpson Says He Has Brain Cancer, Wants Obama to Pardon Him

O.J. Simpson says he has brain cancer and fears he doesn’t have much time left to live.

Simpson, 66, is in jail at the Lovelock Correctional Center in Nevada after being convicted of assault, robbery, and kidnapping.

Simpson is undergoing tests on a tumor in his brain, The National Enquirer magazine reported.

He has asked U.S. President Barack Obama through a letter for a pardon so that he can die at home.

“O.J. says his memory is slipping and he gets painful headaches and other symptoms,” a source told the Enquirer.

“He put off the doctors for weeks after he first started experiencing the symptoms because he was afraid of what they would find.”

Simpson must serve another four years before he can be considered for parole. He’s serving a 33-year sentence. He began the sentence in 2008.

Simpson’s alleged health problems have been reported by the Enquirer before. In July, the magazine claimed that Simpson had only three months to live, citing what Simpson allegedly told “a close prison pal” about his “sky-high blood pressure,” stemming from his diabetes.