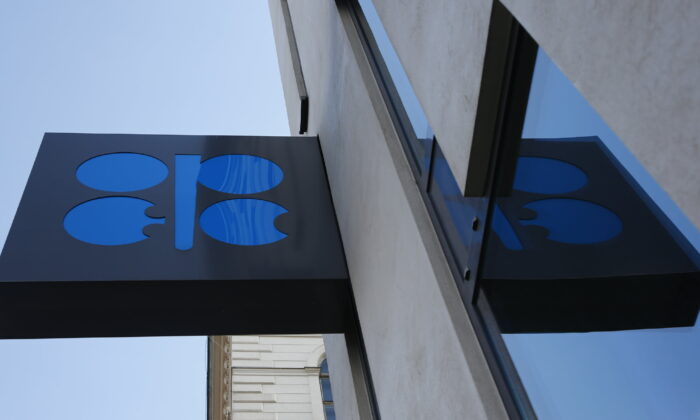 The logo of the Organization of the Petroleum Exporting Countries (OPEC) is pictured at its headquarters in Vienna, Austria, on March 21, 2016. (Leonhard Foeger/Reuters)
Gold and Commodities

LONDON—Oil prices fell Tuesday on fears that an inflation-induced weakening of global economies would soften fuel demand, and as Iraqi crude exports have been unaffected by clashes.

The October contract expires on Wednesday and the more active November contract was at $101.12 a barrel, down 1.76 percent.

Inflation is near double-digit territory in many of the world’s biggest economies, a level not seen in close to a half century. This could prompt central banks in the United States and Europe to resort to more aggressive interest rate hikes that could curtail economic growth and weigh on fuel demand.

Baghdad seeing its worst fighting for years as clashes between Shi’ite Muslim groups spill into a second day.

SOMO also said on Tuesday it can redirect more oil to Europe if required.

The market awaits the upcoming meeting of the Organization of the Petroleum Exporting Countries and allies such as Russia, known as OPEC+, on Sept. 5.

“Possible reduction in OPEC+ production is the reason why the oil market has thumbed its nose at weakening equities and the strong dollar,” said Tamas Varga of oil broker PVM.

Meanwhile, the American Petroleum Institute, an industry group, is due to release data on U.S. crude inventories at 4:30 p.m. EDT (2030 GMT) on Tuesday.