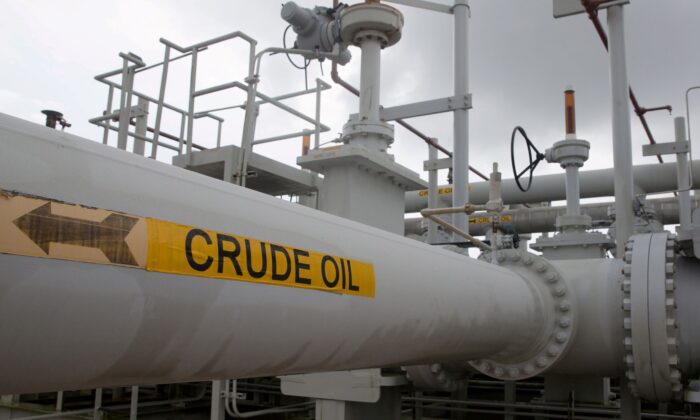 LONDON—Oil fell to around $78 a barrel on Friday on the prospect that OPEC+ producers might step up a planned increase in output to ease supply concerns, although crude remained in sight of a three-year high reached this week.

The Organization of the Petroleum Exporting Countries and allies, known as OPEC+, meet on Monday. Four OPEC+ sources said on Thursday the group was looking at going beyond an existing deal to add 400,000 barrels per day to supply each month.

Beyond October, “a faster ramp-up in OPEC+ production cannot be excluded,” said Stephen Brennock of oil broker PVM. “The prospect of $80 oil does not sit well with the producer group.”

Crude also came under pressure on Friday from a strong U.S. dollar and rise in U.S. crude inventories reported this week.

A strong dollar makes oil more expensive for holders of other currencies and tends to reflect lower investor risk appetite.

Even so, Brent has risen 50 percent this year and reached a three-year high of $80.75 on Tuesday. OPEC+ is facing pressure from consumers such as the United States and India to produce more to help reduce prices.

Jeffrey Halley, analyst at brokerage OANDA, said there was potential for Monday’s OPEC+ meeting to disappoint in terms of adding more supply, citing the inability of some members to raise output and the appeal of high prices to boost revenues.

“Whichever way you cut it; shorting oil is only for the brave with very deep pockets,” he said.

Oil is also finding support as a surge in natural gas prices globally prompts power producers to move away from gas. Generators in Pakistan, Bangladesh, and the Middle East have started switching fuels.