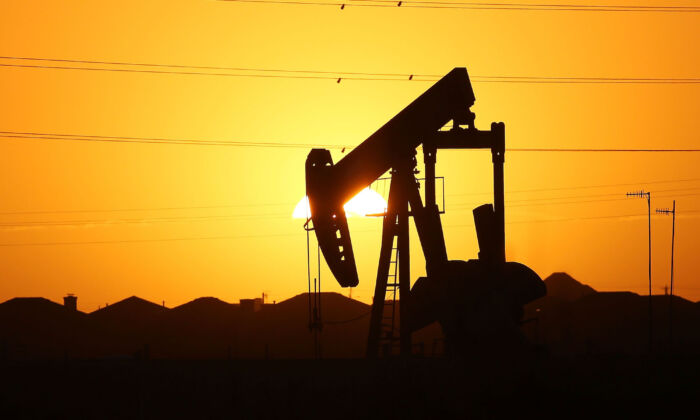 A pumpjack sits on the outskirts of town at dawn in the Permian Basin oil field in the oil town of Midland, Texas, on Jan. 21, 2016. (Spencer Platt/Getty Images)
Commodities

LONDON—Oil prices slipped below $80 a barrel on Wednesday after OPEC+ producers stuck to an agreed output target rise for February and investors assessed the impact of a spike in COVID-19 cases caused by the Omicron variant.

OPEC+ producers, which include members of the Organization of the Petroleum Exporting Countries along with Russia and others, on Tuesday, agreed to add another 400,000 barrels per day of supply in February, as they have done each month since August.

While OPEC+ raised its output target, it will likely struggle to reach it, as members including Nigeria, Angola, and Libya face difficulties ramping up production, Barclays analysts said in a note.

“OPEC+ has adopted the path of least (political) resistance, as it continues to stay the course on increasing output targets, but actual incremental supplies are likely to be much smaller, similar to the demand effect from Omicron.”

Stocks data from the U.S. Energy Information Administration will be published at 1530 GMT.