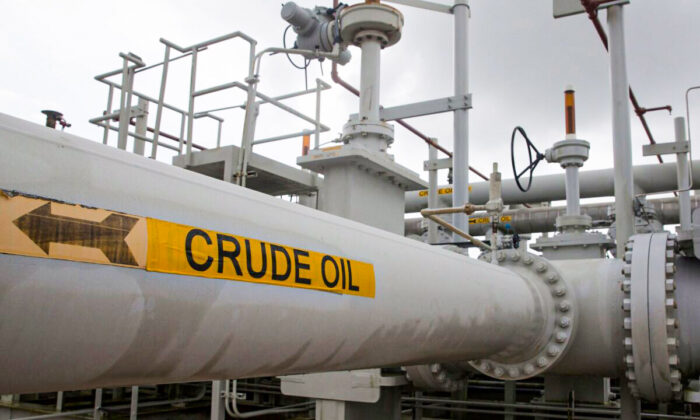 A maze of crude oil pipes and valves is pictured during a tour by the Department of Energy at the Strategic Petroleum Reserve in Freeport, Texas on June 9, 2016. (Richard Carson/Reuters)
Gold and Commodities

LONDON—Oil dropped over $1 a barrel on Tuesday, approaching a multi-month low hit last week, pressured by the latest progress in talks to revive the 2015 Iran nuclear accord, which would eventually allow Tehran to boost exports in a tight market.

The European Union on Monday put forward a “final” text to revive the deal.

“I’m not sure traders are particularly hopeful considering how long it’s taken to get to this point and with there still reportedly being points of contention,” said Craig Erlam of brokerage OANDA.

Talks have dragged on for months without a deal. Still, Iran’s crude exports, according to tanker trackers, are at least 1 million barrels per day below their rate in 2018 when then U.S. President Donald Trump exited the nuclear agreement, so an agreement could allow a sizeable boost in supply.

Oil soared earlier in the year as Ukraine’s war added to supply concerns, with Brent hitting $139 in March, close to its all-time high, in March. Concern of economic slowdown have since been weighed.

Brent fell as low as $92.78 on Friday, its lowest since February, as the Bank of England’s warning on Thursday of a drawn-out downturn intensified fears of slowing fuel use.

Coming into view is the latest round of weekly U.S. oil supply reports, firstly from the American Petroleum Institute at 2030 GMT. Analysts expect a small 400,000-barrel drop in crude inventories.