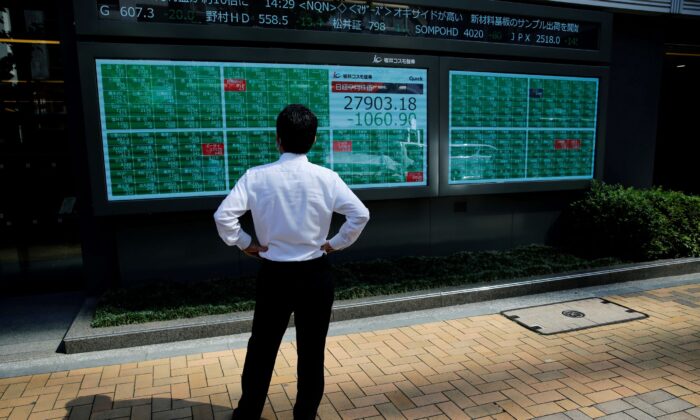 A man watches an electric board showing Nikkei index outside a brokerage at a business district in Tokyo, Japan on June 21, 2021. (Kim Kyung-Hoon/Reuters)
Markets

LONDON—World shares rose on Monday, led by sharp gains in energy shares as crude oil prices soared to three-year highs of almost $80 a barrel while European stocks firmed after Germany’s election results ruled out chances of a purely left-wing coalition.

German shares jumped 1.1 percent, while a pan-European equity index was up half a percent.

Gains were led by the energy sector, which rose almost 2 percent while Wall Street too was tipped for a firmer session, with S&P 500 futures up 0.3 percent.

Increasing focus is on energy markets where oil futures have climbed around $9 a barrel over September. Brent crude traded on Monday at $79.07 a barrel, while U.S. crude rose 97 cents to $74.95.

Shares in European oil majors such as BP, Shell and Total rose as much as 2.5 percent.

Nor is the issue confined to Europe, with a Chinese power crunch triggering a contraction in industry and pressuring the economic outlook.

Goldman Sachs forecast Brent to hit $90 per barrel by year-end, adding “the current global oil supply-demand deficit is larger than we expected, with the recovery in global demand from the Delta impact even faster than our above-consensus forecast”.

Such an increase could stoke speculation that global inflation will prove longer-lasting than anticipated and hasten the end of super-cheap money, favouring reflation trades in bank and energy stocks while bruising bond prices.

The rise in U.S. yields, especially on an inflation-adjusted basis, is also lifting the dollar which rose 0.15 percent against a basket of currencies inching towards the one-month high hit last week.

Earlier, Chinese blue chips gained 0.5 percent, shrugging off problems at Evergrande, which faces another bond coupon payment this week. The boost came thanks to another cash injection from the central bank and hopes the release of Huawei executive Meng Wanzhou would reset ties with the West.

However, Hong Kong-listed shares in Evergrande’s electric car unit plunged as much as 26 percent after it warned it urgently needed a swift injection of cash.

Focus will shift later in the day to U.S. fiscal policy—the House of Representatives is due to vote on a $1 trillion infrastructure bill, while a Sept. 30 deadline on funding federal agencies could force the second partial government shutdown in three years.