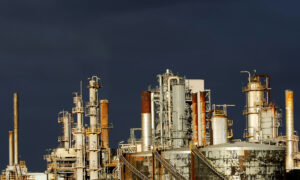 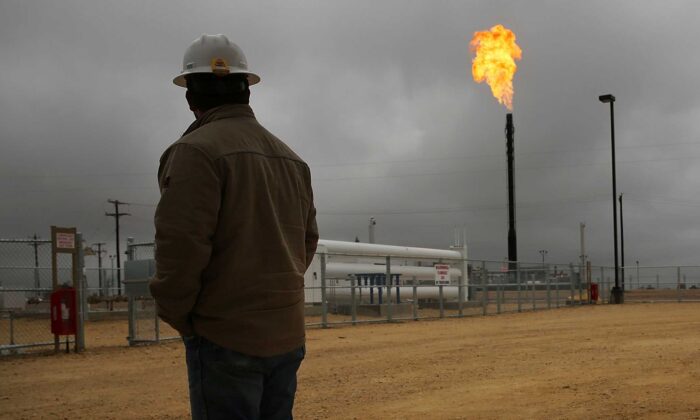 Flared natural gas is burned off at Apache Corporations operations at the Deadwood natural gas plant in the Permian Basin in Garden City, Texas, on Feb. 5, 2015. (Spencer Platt/Getty Images)
Markets

NEW YORK—Oil prices hit their highest level in nearly a year on Friday, gaining 8 percent on the week, supported by Saudi Arabia’s pledge to cut output and strong gains in major equity markets.

Saudi Arabia this week pledged extra, voluntary oil output cuts of 1 million barrels per day (bpd) in February and March as part of a deal under which most OPEC+ producers will hold production steady during new lockdowns.

The kingdom, the de facto leader of the Organization of the Petroleum Exporting Countries, was at odds with some other producers that wanted to boost output to head off U.S. shale companies from capturing more market share. Eventually, an agreement was reached to allow Russia and others to boost output while the Saudis restrict theirs.

“This week the Saudis stepped up to try to take over the market and took ownership of getting prices stabilized,” said John Kilduff, partner at Again Capital LLC in New York. “It seems like they’re on a mission again to get prices back up.”

The number of U.S. oil rigs rose for the seventh straight week, gaining eight to 275 this week to its highest since May, according to energy services firm Baker Hughes Co.

Analysts said oil prices could see a correction in the coming months if fuel demand remains constrained by the pandemic. Strict restrictions on travel and other activity around the world to contain a surge in COVID-19 cases are weighing on fuel sales, weakening the prospect of an energy demand recovery in the first half of 2021.