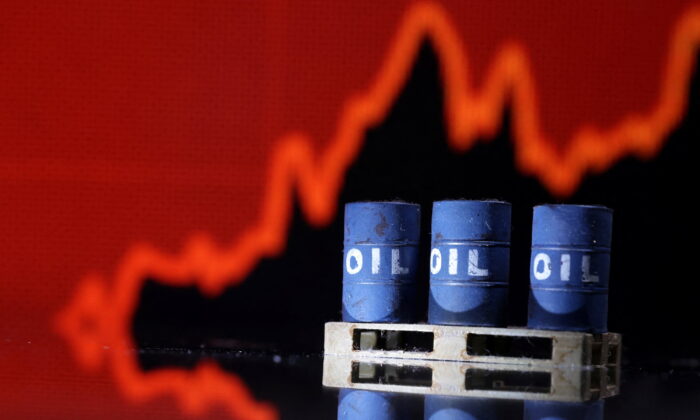 Model of Oil barrels are seen in front of rising stock graph in this illustration, on July 24, 2022. (Dado Ruvic/Illustration/Reuters)
Gold and Commodities

LONDON—Oil rose on Thursday as the prospect of heightened geopolitical risks outweighed recession fears after a flurry of central bank interest rate hikes, including from the Bank of England.

Prices rose by more than $1 earlier in the session.

Russia pushed ahead on Thursday with its biggest conscription since World War Two, raising concerns an escalation of the war in Ukraine could further hurt supply.

Keeping a cap on prices, the Bank of England raised its key interest rate by 50 basis points to 2.25 percent and said it would continue to “respond forcefully, as necessary” to inflation, despite the economy entering recession.

“This just shows how synchronised this current tightening cycle is,” Deutsche Bank said.

The Fed also signaled on Wednesday that U.S. borrowing costs would keep rising this year, in a move that sent Brent and WTI to a near two-week low.

Further pressure followed stock builds. U.S. crude inventories rose by 1.1 million barrels in the week to Sept. 16 to 430.8 million barrels, smaller than analysts’ expectations in a Reuters poll for a 2.2 million-barrel rise.