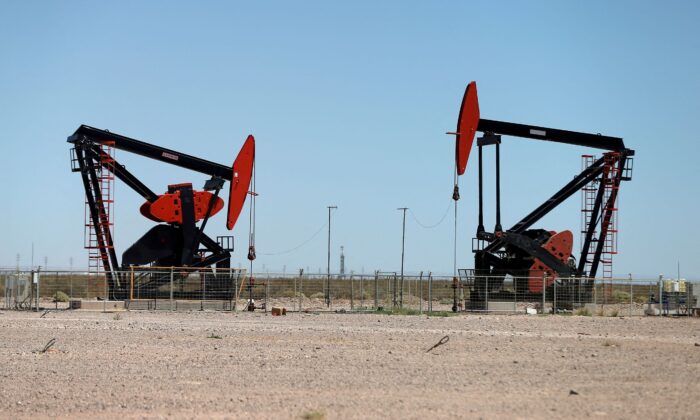 Oil pump jacks are seen at the Vaca Muerta shale oil and gas deposit in the Patagonian province of Neuquen, Argentina, on Jan. 21, 2019. (Agustin Marcarian/Reuters)
Commodities

LONDON—Oil rose on Monday as a supply shortage and political tensions in Eastern Europe and the Middle East put prices on track for their biggest monthly gain in almost a year.

The benchmarks recorded their highest levels since October 2014 on Friday, $91.70 and $88.84, respectively, and their sixth straight weekly gain. They were headed for about 17 percent gains this month, the most since February 2021.

“Today it is above all the concerns about supply outages in connection with the Ukraine crisis that keep pushing prices ever further up,” said Commerzbank commodities analyst Carsten Fritsch.

The head of NATO said on Sunday that Europe needed to diversify its energy supplies as Britain warned it was “highly likely” that Russia was looking to invade Ukraine.

OCP Ecuador, the operator of the country’s privately held heavy crude pipeline, suspended pumping crude on Saturday as a preventative measure after it ruptured in the Amazon, and began cleaning and repairs.

The market is also on alert over the Middle East situation after the United Arab Emirates said it had intercepted a ballistic missile fired by Yemen’s Houthi as the Gulf state hosted Israel’s President Isaac Herzog in a first such visit.

For oil prices, bullish sentiment will likely prevail this week, analysts said, with an expectation that OPEC+ will keep to its existing policy of gradual production increases.

Major producers in the Organization of the Petroleum Exporting Countries (OPEC) and allies led by Russia, collectively known as OPEC+, have raised their output target each month since August by 400,000 barrels per day (bpd).