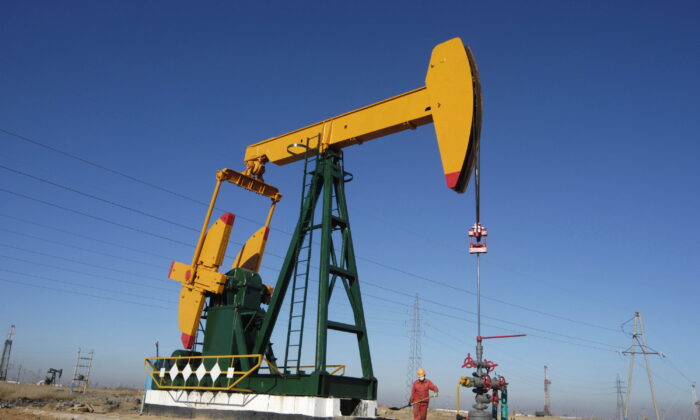 LONDON—Oil prices rose by over 1 percent on Thursday after the International Energy Agency raised its oil demand growth forecast for this year as soaring gas prices drive some consumers to switch to oil.

“Natural gas and electricity prices have soared to new records, incentivising gas-to-oil switching in some countries,” the Paris-based agency said in its monthly oil report, in which it raised its outlook for 2022 demand by 380,000 barrels per day (bpd).

A rise in U.S. oil inventories last week and the resumption of crude flows on a pipeline supplying central Europe capped further price gains, however.

U.S. crude oil stocks rose by 5.5 million barrels in the most recent week, the U.S. Energy Information Administration said, more than the expected increase of 73,000 barrels.

Gasoline product supplied rose in the most recent week to 9.1 million barrels per day, though that figure still shows demand down 6 percent over the past four weeks compared with the year-ago period.

The premium for front-month WTI futures over barrels loading in six months’ time was pegged at $4.38 a barrel on Thursday, the lowest in four months, indicating easing tightness in prompt supplies.

The resumption of flows on the southern leg of the Russia-to-Europe Druzhba pipeline further calmed market worries over global supply.

Meanwhile, physical oil prices around the world have begun to sag alongside futures, reflecting easing concerns over Russian-led supply disruptions and heightened worries about a possible global economic slowdown.