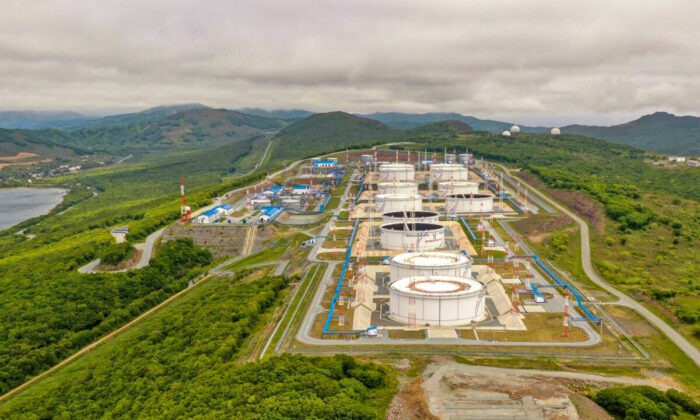 An aerial view shows oil tanks of Transneft oil pipeline operator at the crude oil terminal Kozmino on the shore of Nakhodka Bay near the port city of Nakhodka, Russia, on June 13, 2022. Picture taken with a drone. (Tatiana Meel/Reuters)
Gold and Commodities

LONDON—Oil prices rose on Wednesday on threats that Russia will walk away from its energy supply contracts, reversing losses from earlier in the session when prices fell to their lowest since Russia invaded Ukraine.

Oil rebounded after President Vladimir Putin said on Wednesday that Russia will stop supplying gas and oil if price caps are imposed on Russia’s energy resources.

Analysts already expect oil supply to be tight for the last quarter of the year.

“The halt of release from the U.S. SPR (strategic petroleum reserve) coupled with the implementation of an EU embargo on Russian crude has the makings of a global supply crunch this winter,” said PVM analyst Stephen Brennock.

Adding further support were expectations of tighter oil inventories in the United States.

U.S. crude stockpiles are expected to have fallen for a fourth consecutive week, declining by an estimated 733,000 barrels in the week to Sept. 2, a preliminary Reuters poll showed on Tuesday.

Weekly U.S. inventory reports from the American Petroleum Institute and Energy Information Administration will be released on Wednesday and Thursday respectively, a day later than usual, because of a public holiday on Monday.

In spite of looming supply shortages, the Organization of the Petroleum Exporting Countries (OPEC) and their allies, a group known as OPEC+, decided to cut output by 100,000 barrels per day in October.

The prospect of a global economic recession has heightened demand fears. Credit rating agency Fitch said on Tuesday the halt of the Nord Stream 1 pipeline has increased the likelihood of a recession in the eurozone.

The European Central Bank is widely expected to lift rates sharply when it meets on Thursday. A U.S. Federal Reserve meeting will follow on Sept. 21.

Weak economic data from China has also added to demand woes, as China’s stringent zero-COVID policy has kept cities such as Chengdu under lockdown.