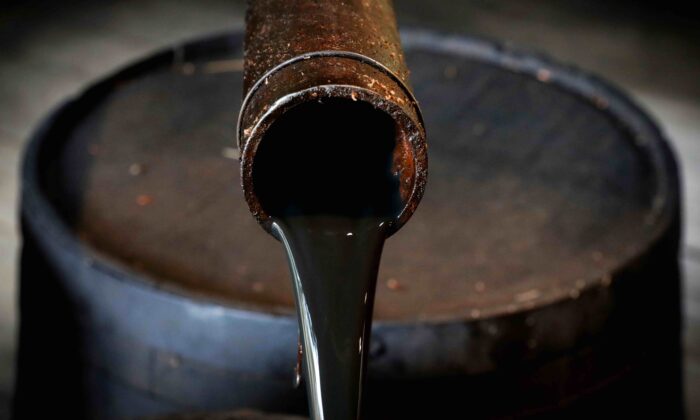 Oil pours out of a spout from Edwin Drake's original 1859 well that launched the modern petroleum industry at the Drake Well Museum and Park in Titusville, Pa., on Oct. 5, 2017. (Brendan McDermid/Reuters)
Commodities

LONDON—Oil rose above $112 a barrel on Friday in a volatile session as fears over disruption to Russian oil exports in the face of Western sanctions offset the prospect of more Iranian supplies in the event of a nuclear deal with Tehran.

Signs of an escalation in the Russia-Ukraine conflict, with reports of a fire at a Ukrainian nuclear power plant, spooked markets before authorities said the fire in a building identified as a training center had been extinguished.

“Russia’s invasion of Ukraine means that fears over supply will remain front and centre,” said Stephen Brennock of oil broker PVM, though he added that there is “a new sense of urgency” to revive the Iranian nuclear deal.

Crude oil hit its highest in a decade this week and prices are set to post their strongest weekly gains since the middle of 2020, with the U.S. benchmark up more than 18 percent and Brent 13 percent.

On Thursday prices swung in a $10 range but settled lower for the first time in four sessions as investors focused on the revival of the Iran nuclear deal, which is expected to boost Iranian oil exports and ease tight supplies.

Oil prices are rising on fears that Western sanctions over the Ukraine conflict will disrupt shipments from Russia, the world’s biggest exporter of crude and oil products combined.

Trading activity for Russian crude has slowed as buyers hesitate to make purchases because of sanctions against Russia while President Joe Biden comes under growing pressure to ban U.S. imports of Russian oil.