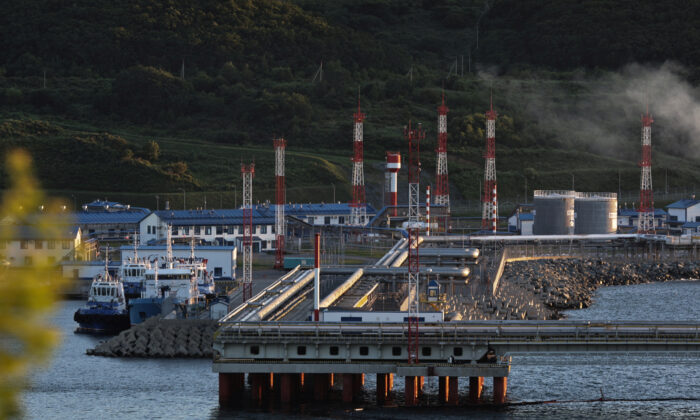 The crude oil terminal Kozmino on the shore of Nakhodka Bay near the port city of Nakhodka, Russia, on Aug.12, 2022. (Tatiana Meel/Reuters)
Gold and Commodities

NEW YORK—Oil rose about 2 percent on Wednesday, rebounding from the previous day’s lows, as an international energy watchdog expects an increase in gas-to-oil switching due to high prices this winter, even though the outlook for demand remains gloomy.

The International Energy Agency (IEA) expects the deepening economic slowdown and a faltering Chinese economy to cause global oil demand to grind to a halt in the fourth quarter of the year.

However, the IEA also said it expects widespread switching from gas to oil for heating purposes, saying it will average 700,000 barrels per day (bpd) in October 2022 to March 2023—double the level of a year ago. That, along with overall expectations for weak supply growth, helped boost the market.

U.S. inventories rose last week, once again boosted by the ongoing releases from the Strategic Petroleum Reserve (SPR), latest government data showed. Commercial stocks rose by 2.4 million barrels as 8.4 million barrels were released from the SPR, part of a program scheduled to end next month.

“The crude number suggests that once we wind down the clock on the Strategic Petroleum Reserve release, we’re going to see substantial drawdowns in inventories so that’s keeping oil high,” said Phil Flynn, an analyst at Price Futures Group in Chicago.

The Organization of the Petroleum Exporting Countries (OPEC) on Tuesday said global oil demand in 2022 and 2023 will come in stronger than expected, citing signs that major economies are faring better than expected despite challenges such as surging inflation.

A hotter than expected U.S. inflation report on Tuesday also dashed hopes the Federal Reserve could scale back its rate policy tightening in the coming months.

Fed officials are set to meet next Tuesday and Wednesday, with inflation way above the U.S. central bank’s 2 percent target.