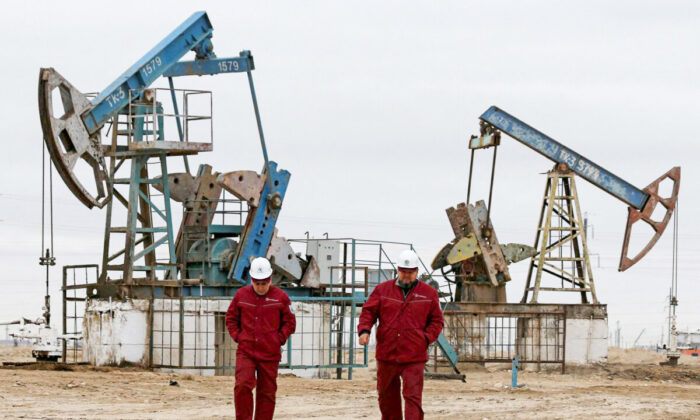 Workers walk as oil pumps are seen in the background in the Uzen oil and gas field in the Mangistau Region of Kazakhstan, on Nov.13, 2021. (Pavel Mikheyev/Reuters)
Commodities

LONDON—Oil prices clawed back heavy losses to rise more than 2 percent on Wednesday on supply tightness and the growing prospect of new Western sanctions against Russia even as Moscow and Kyiv held peace talks.

Crude’s price recovery “suggests the oil market, at least, has a strong degree of scepticism about any ‘progress’ (in the peace talks),” Commonwealth Bank analyst Tobin Gorey said in a note.

The market saw a sharp sell-off in the previous session after Russia promised to scale down military operations around Kyiv, but reports of attacks continued.

“We would see an additional 1 million barrels per day of Russian production at risk if relations with Europe worsen and an oil embargo is put in place, although we still see this as unlikely,” consultancy JBC Energy said in a note.

The United States and its allies are planning new sanctions on more sectors of Russia’s economy that are critical to sustaining its invasion of Ukraine, including military supply chains.

Russia’s top lawmaker on Wednesday warned the European Union that oil, grain, metals, fertilizer, coal, and timber exports could soon be priced in roubles, having previously demanded that “unfriendly” countries pay in roubles for its gas.

The oil market’s focus has turned to tight supply after the American Petroleum Institute reported crude stocks fell by 3 million barrels in the week ended March 25, triple the decline that 10 analysts polled by Reuters had expected on average.

However, oil prices face pressure from weakening demand in China owing to tightened mobility restrictions and COVID-19-related lockdowns in multiple cities including the financial hub of Shanghai.