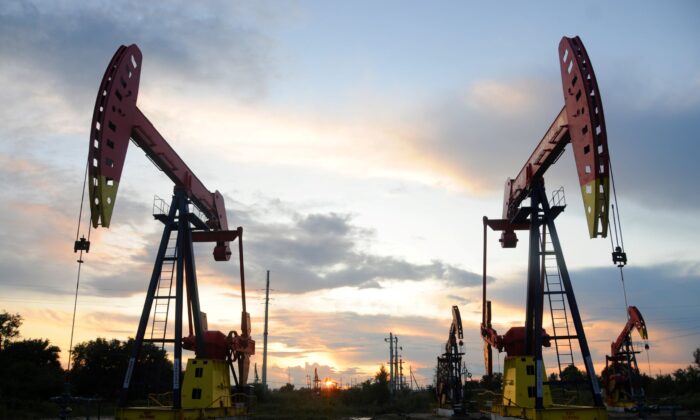 Pumpjacks are seen during sunset at the Daqing oil field in Heilongjiang Province, China, on Aug. 22, 2019. (Stringer/Reuters)
Gold and Commodities

Putin said he had signed a decree on partial mobilization beginning on Wednesday, saying he was defending Russian territories and that the West wanted to destroy the country.

“The partial mobilisation is definitely a bullish factor as it increases the risks of a prolonged war in Ukraine,” said Viktor Katona, lead crude analyst at Kpler.

Oil soared and touched a multi-year high in March after the Ukraine war broke out.

Meanwhile, the United States said that it did not expect a breakthrough on reviving the 2015 Iran nuclear deal at this week’s U.N. General Assembly, reducing the prospects of a return of Iranian barrels to the international market.

The OPEC+ producer grouping—the Organization of the Petroleum Exporting Countries and associates including Russia—is now falling a record 3.58 million barrels per day short of its production targets, or about 3.5 percent of global demand. The shortfall highlights the underlying tightness of supply in the market.

Investors this week have been bracing for another aggressive interest rate hike from the U.S. Federal Reserve that they fear could lead to recession and plunging fuel demand.

The Fed is widely expected to hike rates by 75 basis points for the third time in a row later on Wednesday in its drive to rein in inflation.

U.S. crude oil inventories were estimated to have risen last week by around 2.2 million barrels in the week to Sept. 16, according to an extended Reuters poll.