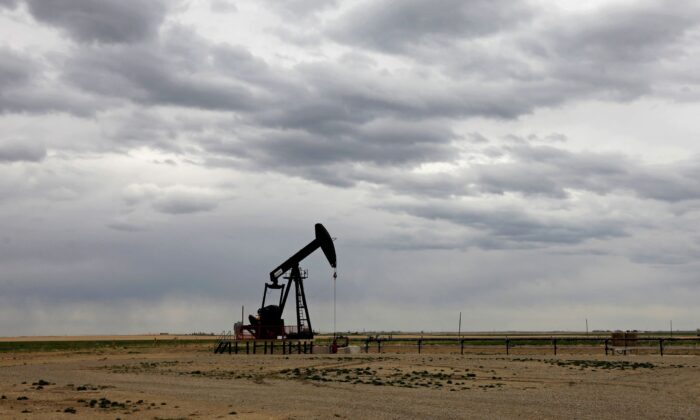 An oil & gas pump jack is seen near Granum, Alberta, Canada, on May 6, 2020. (Todd Korol/Reuters)
Gold and Commodities

LONDON—Oil prices recouped losses on Wednesday as investors weighed conflicting statements on the possible withdrawal of some Russian troops from around Ukraine amid tight global supplies and recovering fuel demand.

Both benchmarks hit their highest since September 2014 on Monday, with Brent touching $96.78 and WTI reaching $95.82.

The price of Brent jumped 50 percent in 2021 while WTI soared by about 60 percent as a global recovery in demand from the COVID-19 pandemic strained supplies.

Moscow announced a partial pullback of troops from Ukraine’s borders, but NATO Secretary-General Jens Stoltenberg said on Wednesday that the alliance had not seen any de-escalation and that Russia was continuing its military build-up.

“The risk of a full scale invasion has receded a bit. But we are unlikely to move out of the current status quo,” said Bjarne Schieldrop, chief commodities analyst at SEB in Oslo.

Beyond Ukraine tensions, the oil market remains tight and prices could still be on course for a move towards $100 a barrel.

“The price action has been an incredibly bullish one-way street higher since just before Christmas. You don’t see this kind of price action unless the market is very tight,” Schieldrop added.

U.S. crude and distillates inventories could have fallen by 1.5 million to 1.6 million barrels last week, a Reuters poll showed.