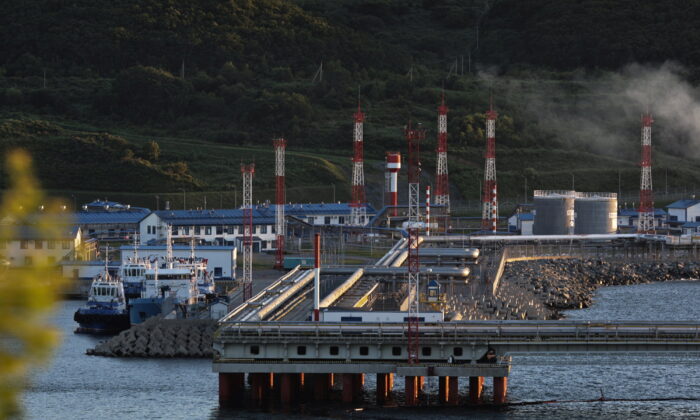 A view shows the crude oil terminal Kozmino on the shore of Nakhodka Bay near the port city of Nakhodka, Russia, on Aug. 12, 2022. (Tatiana Meel/Reuters)
Gold and Commodities

LONDON—Oil prices fell on Thursday, extending sharp losses from the previous session, as China’s extension of lockdown measures to curb the COVID-19 spread exacerbated concerns that a slowdown in economic activity globally would hit fuel demand.

China’s Chengdu extended a lockdown for a majority of its more than 21 million residents on Thursday to prevent further transmission of COVID-19 while millions more in other parts the country were told to shun travel in upcoming holidays.

Meanwhile a number of central banks around the world are expected to begin a new round of interest rate hikes to fight inflation.

The European Central Bank is expected to raise interest rates sharply when it meets later on Thursday. A U.S. Federal Reserve meeting follows on Sept. 21.

Prices drew some support, however, from Russian President Vladimir Putin’s threat to halt the country’s oil and gas exports if price caps are imposed by European buyers.

The European Union proposed capping Russian gas prices only hours later, raising the risk of rationing in some of the world’s richest countries this winter if Moscow carries out its threat. Russia’s Gazprom has already halted flows from the Nord Stream 1 pipeline, cutting off a substantial percentage of supply to Europe.

JP Morgan said OPEC+ may need to cut production by 1 million barrels per day to “stem the downward momentum in prices and realign physical and paper markets which appear disconnected.”

The Organization of the Petroleum Exporting Countries and allies led by Russia, collectively known as OPEC+, agreed on Monday to cut their output by 100,000 bpd for October.