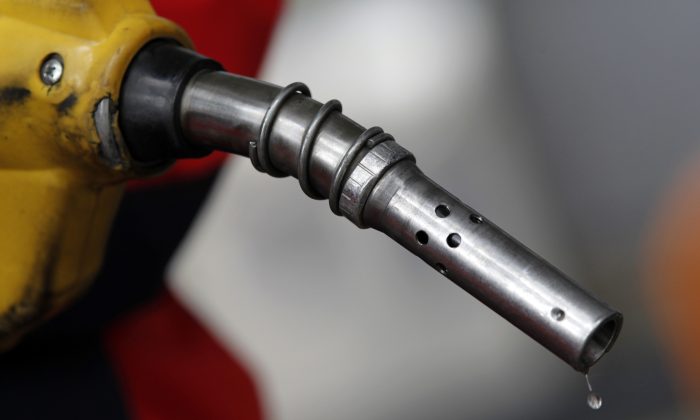 An employee holds a gas pump to refill a car at a petrol station in central Seoul on April 6, 2011. (Lee Jae-Won/Reuters)
Economies

Oil Prices Down More Than $1 on Rising Supply, Trade War

NEW YORK—Oil prices dropped more than $1 a barrel in choppy trading on Oct. 30 on signs of rising supply and concern that global economic growth and fuel demand will fall victim to a deepening of the U.S.-China trade war.

Earlier in the session, Brent reached a session low of $75.09 a barrel, while WTI slumped to $65.33 a barrel. Both contracts have fallen about $10 a barrel from four-year highs reached in the first week of October.

Prices were pressured as U.S. inventories were expected to rise for a sixth straight week as other top producers Saudi Arabia and Russia signaled potential output increases.

Oil has been caught in the global financial market slump this month, with equities under pressure from the trade fight between the world’s two largest economies.

President Donald Trump said on Oct. 29 he thinks there will be “a great deal” with China on trade but warned that he has billions of dollars worth of new tariffs ready to go if a deal is not possible.

Trump said he would like to make a deal now but that China was not ready.

“Mounting perception of a weakening in global oil demand due to increasing tariff issues between the U.S. and China, while extremely difficult to measure, will be maintaining some negative influence in keeping would-be buyers sidelined,” Jim Ritterbusch, president of Ritterbusch and Associates, said in a note.

That is an increase of 10 million bpd since the start of the decade and means the three producers alone now meet a third of global crude demand.

Investors awaited industry data on U.S. crude inventories, due to be released on Oct. 30. Stockpiles were expected to have risen about 4.1 million barrels in the week ended Oct. 26, an extended Reuters poll showed on Oct. 30.

The United States is set to impose new sanctions on Iranian crude from next week, and exports from the Islamic Republic have already begun to fall. Saudi Arabia and Russia have said they will pump enough to meet demand once U.S. sanctions are imposed.