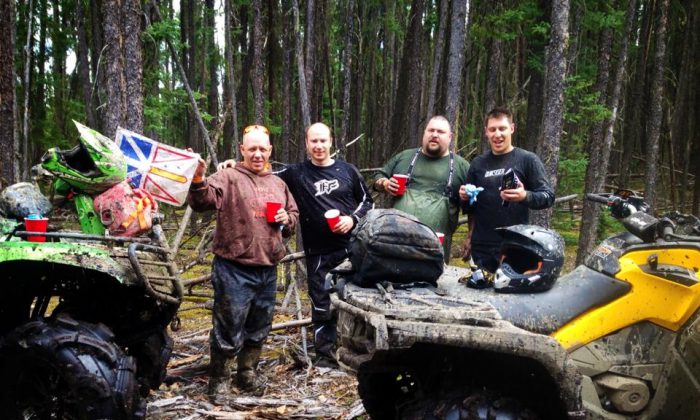 Steve Anderson (C) enjoys some ATV action with friends in Fort McMurray—just like back home in Newfoundland. Despite having a little community of fellow Newfoundlanders around him in Fort McMurray, Alberta, Canada, Anderson says it's not a good place to raise a child. Many from Canada's easternmost island province of Newfoundland make the long commute to the oil sands out west, leaving wives and children back home. (Courtesy of Steve Anderson)
Canada

The social price of a 3,000 km commute to the oil sands
By Tara MacIsaac
biggersmaller
Print

CODROY VALLEY, Newfoundland—Long before the bounty of Alberta’s oil sands drew Newfoundlanders from family and home, scarce work on the island had driven men offshore to earn their bread.

Carving a livelihood out of the Rock has never been an easy feat. Traditionally, the men have left for work on the sea or on out-of-province construction projects.

Long commutes and extended absences have been a way of life in Newfoundland. However, the scale and intensity of the westward move to Fort McMurray that began a few decades ago sets it apart from past experience.

When Steve Downey’s second daughter, Stacey, was born 18 years ago, he left home the next day to return to work out west. For the first 18 months of her life he was on a schedule of 11-week work stints followed by three weeks off to spend back in Codroy Valley, Newfoundland.

“She didn’t know him,” said his wife, Karen Downey. “She would cry when he came in.”

Downey sits in a big leather recliner in her home overlooking the Grand Codroy River. The sun streams in through the patio door, which opens onto a large deck.

This house that oil money built is nestled high on one of the rolling hills lining the valley. Uncle Skip and Uncle Terry live just down the road. It’s the home the Downeys wanted for their children. They didn’t want to raise their family in Fort McMurray, where the work is.

The options faced by many Newfoundlanders and others on the East Coast were summed up by one such migrant worker, who told anthropologist Nelson Ferguson: “Either the whole family moves out west, which a lot of ’em don’t want, or stay home while daddy goes to work and comes back home. Or you all stay here and go on welfare. Jobs are very, very rare here.”

Ferguson lived with the families left behind in Cape Breton, Nova Scotia, whose circumstances are very similar to those of Newfoundlanders. He also lived with workers in Fort McMurray as he studied the effects of the westward migration on family life during his PhD studies at Toronto’s York University.

Each of the options put forth by this worker have their benefits and shortcomings. Laurie Anderson tried the first option before moving on to the second.

Why Not Bring the Family to Fort McMurray?

“There’s not a lot of morals there,” she said. Fort McMurray is known for drug problems and other issues that give it a bad rap, at least among Newfoundlanders generally accustomed to rural or small-town life.

“Where there’s money … these things follow,” said Sara Dorow, associate professor of sociology and associate graduate chair at the University of Alberta.

Dorow has conducted more than 120 interviews with people involved in oil sands work in Fort McMurray. Her interviewees cover the broad spectrum of people in the city. As several researchers told the Epoch Times, the workers and their family situations are diverse—it is hard to make generalizations about the effects the work has on family life.

Dorow noted that the increasing number of foreign migrant workers, many of whom have lived in large cities, view Fort MacMurray as a sort of backwater town, whereas many Newfoundlanders see it as a booming metropolis.

The main reason Anderson decided to move back to Newfoundland, however, was not the environment in Fort MacMurray—it was the cost of living.

The average single-family home sells for more than $760,000, about twice the national average. The average home in Newfoundland sells for $290,000.

The only advantage Anderson could name for raising kids in Fort McMurray was that they could get summer jobs easily.

Too easily, some feel, according to Dorow.

Jobs are plentiful, have high turn-over rates, and are well-paid—youth can earn $18 an hour working at McDonald’s or in a store. Some expressed to Dorow “concern that their children were growing up in a sort of ‘unreal’ place.”

Ferguson said Fort McMurray is trying to be more community oriented and to develop more resources for families. “It’s trying very hard to make itself into what I think we would call ‘a regular Canadian community,'” he said.

Steve Anderson (no relation to Laurie Anderson) moved to Fort McMurray from Port Aux Basques, Newfoundland, when he was 19.

He had no idea how long he would stay or what he might do in the long-term. “When you start making that kind of money—I didn’t want to go back to school,” he said.

The median earnings of oil and gas workers in Alberta who live out-of-province was just under $60,000 in 2009—but one in four of these workers earned more than $96,000 annually. This represents a gain of 79 percent in earnings over the median salary in Atlantic Canada.

About 10 years later, Anderson is living in Fort McMurray with his wife, Shawna, who is also from the East Coast, and his 3-year-old daughter, Paislee. But they want to move back east.

“A lot of people in Fort McMurray are from Newfoundland and it kind of makes it like home sometimes. We go quading [riding all-terrain vehicles] and snowmobiling and get together for drinks a lot.”

He added, however, that “Fort McMurray is a working town. You hardly see your friends, because everyone works different shifts. It’s not a place where I really want my kid to grow up.”

According to Statistics Canada, the number of workers commuting from Atlantic Canada to Alberta increased three-fold between 2004 and 2008.

When the Epoch Times asked Downey about times she wished her husband were home, she replied: “You don’t have enough ink in your pen.”

“There are many times you need your husband around.”

In 2004, she had emergency open-heart surgery. He had to wait five days to make it to see her, then he had to go back after a couple of weeks. That was one time she wanted him by her side.

Their daughter, Bethany, however, did not feel her father’s absence too much.

“We were just so used to him being gone all the time. We remember more of him being here,” said Bethany, now 21. “I remember from high school when dad was gone, I got the car,” she said with a laugh.

Her long-term boyfriend, a mechanic by trade, is planning to go to Fort McMurray. She said she won’t put up with it long-term, though. She saw how hard the separation was on her mother.

Downey pointed out it was hard on her husband too. “He’s a plugged-in dad. He wants to know what’s happening.”

Nonetheless, after decades of this lifestyle, “We never feel disconnected,” she said.

“That’s something specific to me and Steve. We’re lucky that way. A lot of people would have drifted apart.”

Coping With the Lifestyle

Ferguson said some families have developed ways to cope with the separation. Having a clear plan to ensure regular communication has helped, he said. It also helps to talk about the mundane matters.

Ferguson said it is good to include the “Bobby hit Billy” stories too, and to stay “connected for good or for worse.”

Making sure not to disrupt the daily routine when dad comes home is also important.

Ferguson said an elementary school teacher once told him she observed a child in her class whose father worked out west. Every time the father would leave, the child would act up in the same manner as children going through a divorce at home.

“It’s almost like this student was experiencing a divorce every month,” he said.

The situation of wives left alone back in Newfoundland could be compared to that of single mothers, said Barb Neis, a professor of sociology at Newfoundland’s Memorial University. She is leading the “On the Move” project, which is a broader study on the impacts of long commutes.

She warned not “to assume that this type of lifestyle has more strain associated with it than other kinds of lifestyles.”

Downey said that when her husband was home, he was often “Mr. Mom” while she was working.

He also never missed a Christmas, because he had some ability to choose which contracts he would work, and thus when he would work. She noted that if he had worked on the boats at Marine Atlantic—one of the largest employers in the region whose jobs are, nonetheless, rare and coveted—he would have missed many Christmases.

Nicholas Hartmann is an adjunct professor at Western Kentucky University and a PhD candidate at Memorial University who has studied family folklore and ritual among offshore working families in Newfoundland.

Hartmann said via email: “Working away from home when you are from Newfoundland is not an unacceptable practice, and in fact, is considered a rite of passage for many islanders.

“Many of the people I spoke with in my research had a strong desire to raise their children in Newfoundland, and even those who grew up mostly in Alberta never really considered themselves to be Albertan—they identified as Newfoundlanders.

“I would go a step further and suggest that it is a pilgrimage of sorts … It involves taking yourself out of your comfort zone, subjecting yourself to hardships, and heading in another direction in order to achieve a higher goal.”

Correction: An earlier version of this story incorrectly referred to Newfoundland and Labrador as a “have not” province. In fact, the province stopped receiving equalization payments in 2008, making it now a “have” province. The Epoch Times regrets the error.