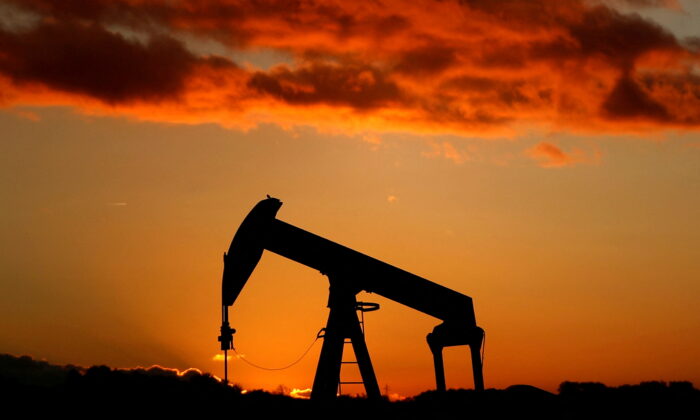 An oil pump is seen at sunset outside Scheibenhard, near Strasbourg, France, on Oct. 6, 2017. (Christian Hartmann/Reuters)
Gold and Commodities

LONDON—Oil prices fell on Thursday as talks to resurrect a nuclear deal with Iran entered their final stages, but losses were capped by heightened tensions between top energy exporter Russia and the West over Ukraine.

Both contracts fell more than 2 percent earlier in the session.

“(The) oil market is locked in a tug of war between Iranian sanctions relief and Russian-Ukraine tensions,” said Stephen Brennock at brokerage PVM Oil.

The United States is in “the midst of the very final stages” of indirect talks with Iran, aimed at salvaging a 2015 deal limiting Tehran’s nuclear activities, State Department spokesperson Ned Price said on Wednesday.

A decision on salvaging the nuclear deal was said by France to be only days away on Wednesday and that it was up to Tehran to make the political choice, though Tehran called on Western powers to be “realistic.”

With a new deal possibly on the horizon, South Korea said on Wednesday that it had held talks on resuming imports of Iranian crude oil and unfreezing Iranian funds. South Korea was previously one of Tehran’s leading oil buyers in Asia.

However, continuing tensions over a possible Russian invasion of Ukraine continues to support oil markets because of the potential disruption to energy supplies.

Russia’s announcement of a partial pullback of troops from near Ukraine this week was countered by Western governments warning that Russia was building up military presence near the Ukraine border.